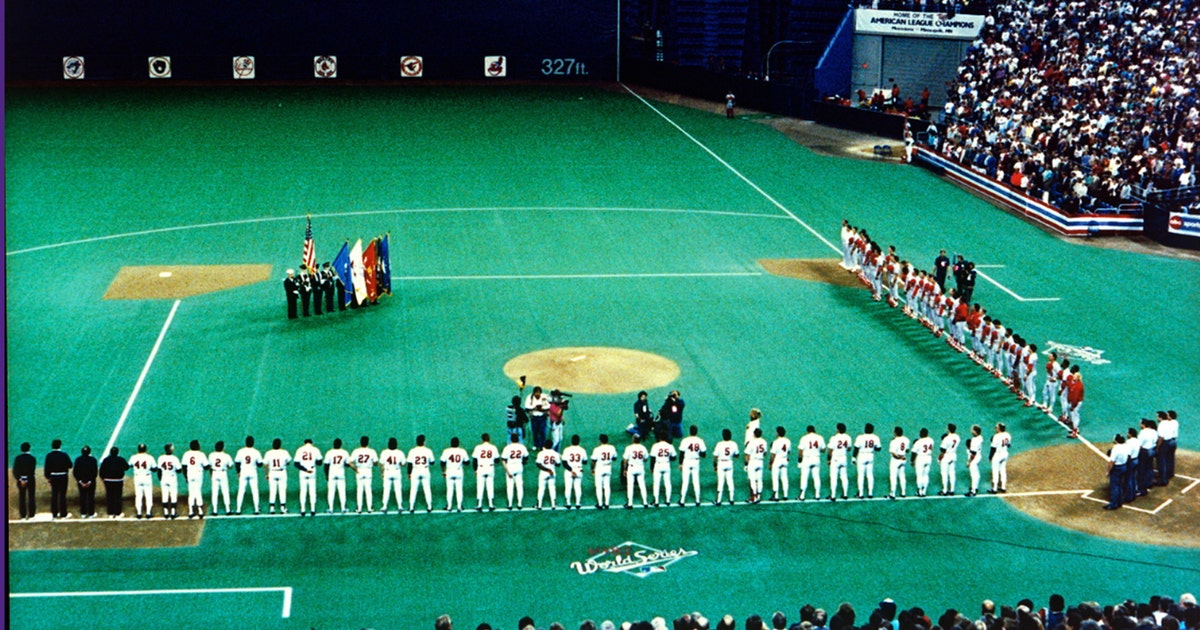 As we gear up for replays of the 1987 World Series on FOX Sports North over the next week we thought we’d take a look at some tidbits leading up to the series you might (or perhaps might not) remember or know about.

The Twins were known as mashers, hitting 198 home runs, fifth in the American League. Kent Hrbek hit 34, Tom Brunansky 32, Gary Gaetti 31 and Kirby Puckett 28. Minnesota was 10th in the AL in batting average, ninth in on-base percentage and eighth in runs – but third in slugging percentage.

Minnesota beat Detroit, which won 98 games to win the AL East, in five games in the best-of-7 series. The Twins won the first two games at home, lost Game 3 in Detroit then took the final two at Tiger Stadium. Minnesota pummeled the Tigers, scoring 34 runs – all but two coming off Detroit starting pitchers.

The Cardinals went 95-67 to beat out the New York Mets by three games and win the National League East. St. Louis relied on speed over power. The Cardinals hit just 94 homers (35 by Jack Clark, who was injured and would have just one plate appearance in the NLCS and wouldn’t play in the World Series) but had 248 stolen bases – 50 more than any other team in the NL (Milwaukee led the AL with 176). Vince Coleman had an incredible 109 of those but five others had 10+, including Ozzie Smith with 43.

Without Clark, St. Louis went the full seven games before knocking off the San Francisco Giants. Down 3-2 in the series, the Cards returned home and tossed back-to-back shutouts, 1-0 and 6-0. However, Terry Pendleton was hurt in Game 7 and would miss some of the World Series.

If San Francisco had advanced to the World Series, Twins manager Tom Kelly said Bert Blyleven would have started the opener. Since St. Louis won, Kelly chose left-hander Frank Viola, in part to keep the Cardinals’ running game more at bay and also to force St. Louis’ bevy of switch-hitters to bat right-handed.

The Twins being in the World Series – and Viola starting – meant he had to give up a previous commitment: Being the best man at his brother’s wedding, which was being held the same day as Game 1.

The gauntlet was laid down, by all people, a manger. St. Louis’ Whitey Herzog said of the Twins, “It’s a shame that one team wins 98 games and the other 85 and the one with 85 wins (the ALCS).”

Minnesota players were of course asked for their reaction to Herzog’s comment. Hrbek bit.

“It’s a shame they can only score one run a ballgame,” he said, referring to the lack of power without Clark. “That’s too bad.”

Other like second baseman Steve Lombardozzi and shortstop Greg Gagne wouldn’t be sucked in.

“Heck, we could have won 84 and still won it. That has nothing to do with anything now,” Gagne said. “Now it’s 0-0 and the best team’s going to win the seven-game series. Talking can’t do nothing.”

One thing the Twins had was home-field advantage. Herzog and Cardinals players all remarked they knew the Metrodome could get very loud.

United Press International broke down the series position-by-position and gave the overall edge to the Cardinals. UPI declared St. Louis had an advantage at catcher, second base, shortstop, left field, starting pitching and defense. The Twins had an advantage at first base, third base, center field and right field with the teams declared even in relief pitching and bench.

Joey Bennett, the sports editor of the Greensburg (Ind.) Daily News, predicted a Cardinals series victory. He probably summed up the feelings of many prognosticators when he wrote “They have much better pitching depth than the Twins, and the shortage of left-handed pitchers by Minnesota will allow the Cardinals switch-hitters to bat from the left side against all starters except Frank Viola. … Minnesota will have a big home field advantage in the Metrodome, but something tells me they played a little over their heads against a Detroit team drained from a tough pennant chase.”

Here’s the schedule on FOX Sports North for the airing of the 1987 World Series:

UK ruling due on Heathrow expansion amid climate concern