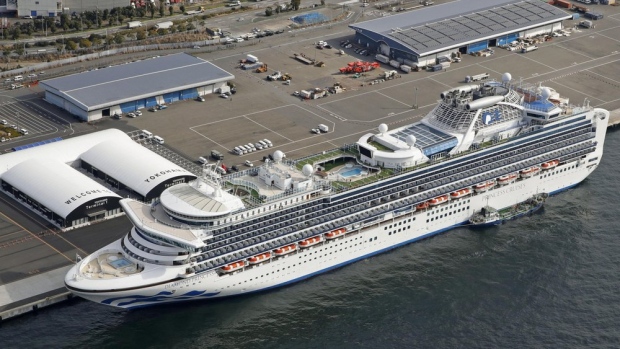 TORONTO — Another 39 positive cases of COVID-19 have been confirmed on a quarantined cruise ship in Japan, but it’s unclear if any of those new infections involve Canadians.

“We are following guidance from the Japan Ministry of Health on plans for disembarkation protocols to provide medical care for these new cases,” the cruise line said in a statement.

Eight Canadians are among at least 174 passengers who have tested positive for the novel coronavirus. In total, an estimated 3,700 people are trapped aboard the ship, which has the largest cluster of positive cases outside China.

Among those quarantined on the ship are Greg and Rosemarie Yerex, a couple from Port Dover, Ont. who admit they’re beginning to get a little stir-crazy but are still in good spirits.

The ship has offered supervised walks on the deck for passengers, but Greg and Rosemarie have opted to remain in their cabin “and just enjoy the fresh air on our balcony instead,” Rosemarie said.

The vessel will remain under quarantine in the waters off Yokohama until Feb. 19.

On Monday, another Canadian couple aboard the ship told CTV’s Evan Solomon that “stress levels are starting to rise.”

“We can see the ambulances coming and going. Today was especially bad. We had a lot more passengers and crew staff come down with the virus, and they were being removed all day long,” Trudy Clement said on Monday.

“There’s three other Canadians that are just above us, and we trade news back and forth … They’re of the same mindset as we are: it’s (that) this is not a good place to be.”

The global death toll from the virus has surpassed 1,000, with another 42,000 infections in at least 25 countries.

With files from CTV’s Alexandra Jones

Georgia Senate seeks to put its stamp on $27.3B budget

Magic plan to build up to 4,000 fans in seats for regular season games