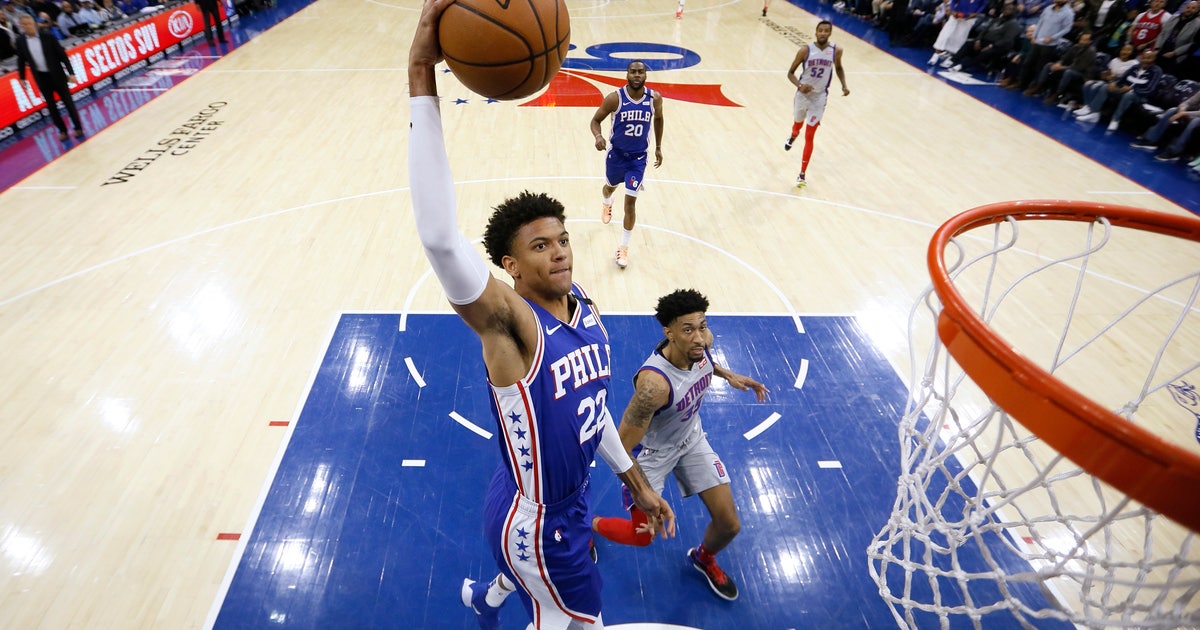 PHILADELPHIA (AP) — Joel Embiid had 30 points and 14 rebounds in his return from a sprained left shoulder, leading the Philadelphia 76ers to a 124-106 victory over the Detroit Pistons on Wednesday night.

Embiid’s return from a five-game absence was the peak of an otherwise disconcerting day for the Sixers as they ramp up their playoff push.

All-Star guard Ben Simmons will miss at least three more weeks with nerve issues in his lower back. Former Sixers star, and current Miami Heat guard, Jimmy Butler popped off at Brett Brown on a podcast and criticized the way the Sixers coach used him in the postseason. And, the Sixers and Pistons played in front of potentially the last game with fans at the Wells Fargo Center for an undetermined time.

NBA owners are leaning toward a proposal to temporarily play games without fans in the buildings in response to the global concerns surrounding the coronavirus.

“It’s just part of what we’re all going through, which is quite unusual at the moment,” Brown said. “You are completely aware that this is looming, this possibility.”

Brown didn’t need a quiet arena to hear the reverberation throughout Philly when Butler went on former Sixers teammate JJ Redick’s podcast and ripped his coaching style. Butler, who played the final 55 games of last season with the Sixers, said, “On any given day, me as a person, as a player, I didn’t know who the (expletive) was in charge. I think that was my biggest thing.”

Butler said players watched film sessions in silence and became peeved when he said he learned the organization wanted Brown to “control” the All-Star guard. Butler decided not to return to the Sixers and landed in Miami on a sign-and-trade deal.

“I heard about, I understand what he’s saying,” Brown said. “I have not listened to it and I doubt I will.”

Simmons missed his eighth straight game and will continue to undergo daily treatment for his nerve impingement. He is gradually increasing the activities in his strength and conditioning program and there’s a shot the 23-year-old Simmons is back for the playoffs.

“There’s no timeline on it,” Simmons said before the game. “Whenever I’m back, I’m back. Whenever I’m 100 percent, I’m coming back. I’m not here to sit and just wait. When I’m healthy, I’ll be playing.”

Simmons said he feels no pain in his back and hasn’t considered surgery if there’s not much more improvement.

“To know where I am compared to two weeks ago, I feel much, much better,” Simmons said. “I’m very confident.”

So that left Embiid to raise the spirits of maybe 15,000 fans at the Wells Fargo Center, a night after the NHL’s Flyers hit 19,000 in the same arena. The Sixers averaged 20,643 this season, and the priciest tickets in town dipped faster than Detroit’s shooting percentage. StubHub had tickets for sale on the lower baseline at $15 a pop and seats in one club box were going for $20. That’s hundreds less than usual secondary markup, though the Sixers announced a sellout crowd of 20,172 fans.

The fans who did show — including director M. Night Shyamalan and Food Network celebrity Guy Fieri — saw the Sixers improve to a stunning 29-2 at home. . Mike Scott drove the lane and threw down a thunderous one-handed jam that gave the Sixers an 11-point lead and had Embiid pounding his legs with his fists in excitement. Embiid swished a 3 from the top of the arc in the fourth and stretched his arms toward a wildly cheering crowd.

Pistons: Pistons coach Dwane Casey on how he might change his approaching coaching in an empty arena: “Probably cuss less.” … Christian Wood led the Pistons with 32 points.

76ers: G Josh Richardson also returned to the lineup after he missed three games while in the concussion protocol.

The NHL’s Flyers offered refunds and ticket exchanges to any fans who did not attend Tuesday’s game because of health concerns. Comcast Spectacor declined to say how many fans took them up on the offer. The Sixers said of Wednesday’s ticket holders: “We will manage on a case-by-case basis and work closely with our fans toward finding another game for them to attend in the future.”

Pistons: At Toronto on Saturday night.

Upon Further Review: Gophers’ opener reminiscent of years past – just not 2019

World Series Watch Party: How much does momentum factor into World...