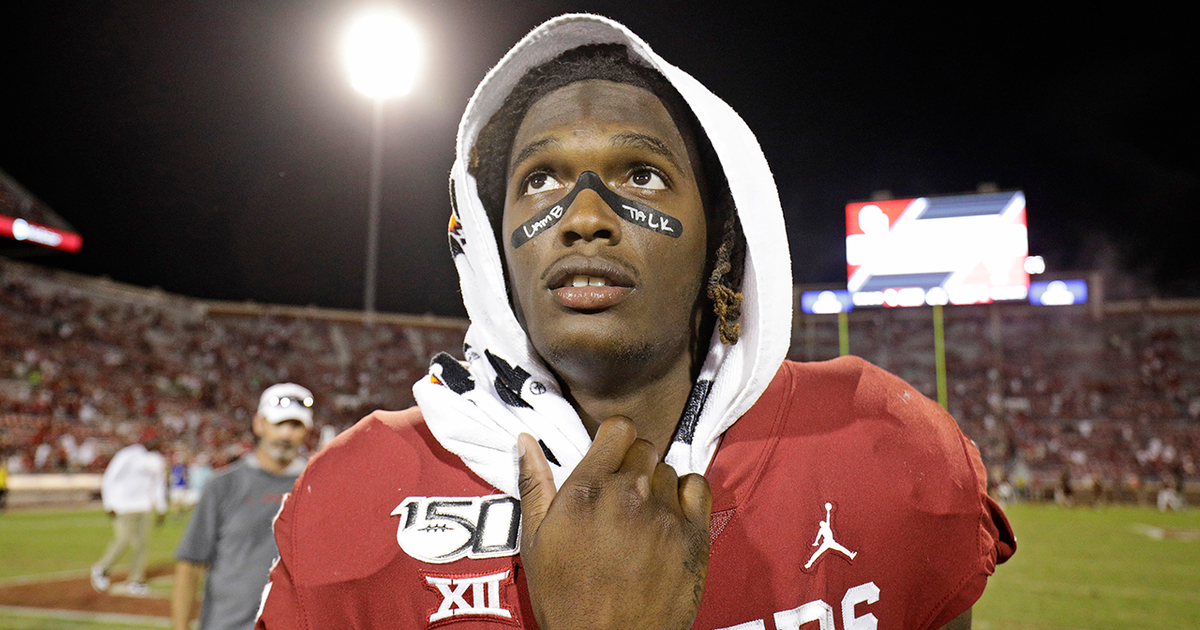 Dallas got 88 problems but CeeDee Lamb ain’t one.

The numbers are in 🌟❕#DallasCowboys

With the 17th pick in the 2020 NFL Draft, the Dallas Cowboys struck gold, selecting the No. 1 receiver on their board, Oklahoma’s CeeDee Lamb.

The @dallascowboys got a star in CeeDee Lamb! 🌟 @_CeeDeeThree #NFLDraft pic.twitter.com/Y8MbjKAcuu

Lamb was projected as a high first round pick and most draft experts thought he would be the second wide receiver off the board after Alabama’s Jerry Jeudy. Joel Klatt predicted that the Las Vegas Raiders would take Lamb at No. 12 and Mel Kiper Jr. thought the Denver Broncos would snatch Lamb up at No. 15.

However, the Raiders somewhat surprisingly picked Henry Ruggs III at No. 12 and the Broncos picked Jeudy at No. 15, leaving Lamb available for the Cowboys.

Dallas, get ready for a playmaker … CeeDee Lamb 💪#NFLDraft pic.twitter.com/xbUebbeiOt

During his three years at Oklahoma, Lamb was a star.

He was named a consensus All-American, as well as First-Team All-Big 12 in 2019.

So, when the draft concluded last weekend, there was only one thing left to figure out about Lamb’s arrival in Big D: what number will the young star wear?

It only took a few days to get our answer.

Lamb will don No. 88, the most famous number in Cowboys franchise history.

Only three wide receivers before him have worn the number: Drew Pearson, Michael Irvin and most recently, Dez Bryant.

Pearson played for the Cowboys from 1973-1983, and was a member of the Super Bowl XII team in 1978. He was a 3-time Pro Bowler and 3-time First-Team All-Pro selection. He is also a member of the Dallas Cowboys Ring of Honor.

Irvin – better known as “The Playmaker” – won three Super Bowls with the Cowboys, was a 5-time Pro Bowler and was named First-Team All-Pro once. He is also a member of the Dallas Cowboys Ring of Honor, and in 2007, he was inducted into the Pro Football Hall of Fame.

And succeeding Irvin was Dez Bryant, who played in Dallas from 2010-2017, where he was a 3-time Pro Bowler and First-Team All-Pro selection once.

Now, the No. 88 lands with Lamb – but not everyone is on board with him donning it, including Stephen A. Smith, who thinks the uniform should be reserved for bonafide No. 1 receivers.

Cooper has made the Pro Bowl four times during his five-year career, and in March, he signed a 5-year, $100 million extension with the Cowboys. In 16 games last season, he caught 79 passes for 1,189 yards and 8 touchdowns.

Former Cowboys defensive end Marcus Spears agrees with Smith, saying that the No. 88 is more than just a number – it comes with the responsibility of being great.

“Does he deserve it? We don’t know. To be determined … It’s usually the No. 1 receiver that wears 88. That’s what it’s synonymous with in Dallas. For as great as Drew Pearson was and as great as Dez Bryant was, 88 is Michael Irvin’s number … The number belongs to the dude that did the most work in the number … So, with that number comes a large responsibility … CeeDee Lamb being No. 88 creates pressure for the kid.”

However, there are those that campaigned for Lamb to wear the number, including the Cowboys owner.

Jerry Jones said he would like CeeDee Lamb to wear No. 88, following in the Cowboys WR footsteps of Dez Bryant, Michael Irvin and Drew Pearson

Bryant is also on board.

I can’t feel no way but be supportive of lamb and the rest of these young stars that’s entering the league.. I believe it’s my job to help them succeed as much on and off the field https://t.co/ljV830IAQL

Skip Bayless, a long-time Cowboys and Oklahoma Sooners fan, was ecstatic about Lamb landing in Dallas, and he believes that Lamb will emerge as the No. 1 option at receiver.

“I was in awe of what [Lamb] did for my Oklahoma Sooners because you just couldn’t stop him … CeeDee is no lamb after the catch. He is a lion … He’s a stud. He’s a Pro Bowler … I think CeeDee will quickly be better than Amari Cooper.”

“My Dallas Cowboys managed to pull off the steal of the 1st round. CeeDee Lamb is a flat-out alpha No.1 receiver. Jerry Jones has done an underrated great job of drafting over the last decade.” — @RealSkipBayless pic.twitter.com/QTsanyyw9k

Even Irvin himself is excited about Lamb rocking the 88, labeling him a “true-bred.”

Michael Irvin on CeeDee Lamb getting No. 88: “In order to get this number, you must be what we call a ‘true-bred.’ That means born to lead and bred, right here, with the Dallas Cowboys.”#CowboysNationhttps://t.co/fO58Z6Q3pp

In fact, Irvin called Smith to discuss Lamb wearing No. 88, saying that the Cowboys can have more than one alpha receiver.

“I love this kid. I ain’t talking about, ‘I like this kid.’ I love this kid … This is what the league is now. We are moving into a time where teams have two No. 1 receivers … Amari Cooper is a No. 1. CeeDee Lamb is most definitely a No. 1 … Lamb is a combination of all the 88s.”

Whether Lamb lives up to Michael Irvin’s Hall of Fame standards is yet to be seen, but what we can see is that Dallas has added another explosive piece on the outside.

Despite risks, Greek islands keen to reopen to tourists

Carville: Biden “Is Doing What He Needs To Do”

Hurricane warning for New Orleans as Zeta swirls over Mexico

Sen. Pat Toomey: Labor Market Is Being Held Back By Government...