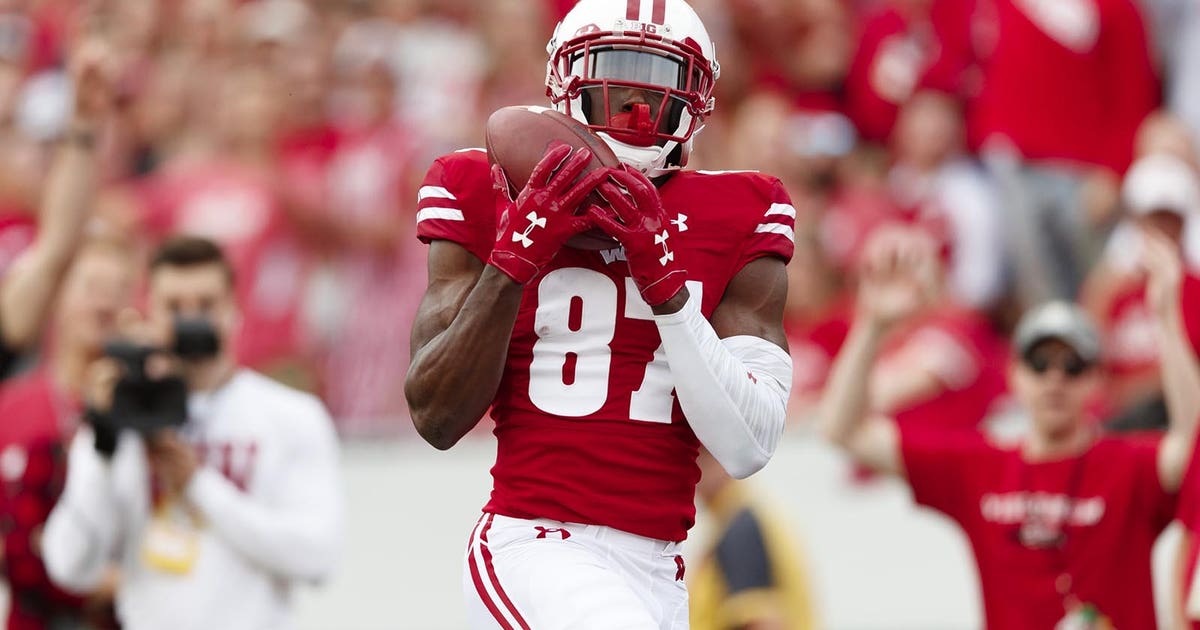 Quintez Cephus returned to his car after a practice just like he always did. It hadn’t been that long since Cephus’ life had been turned right-side up.

After a yearlong legal battle, which culminated in him being found not guilty on Aug. 2, 2019 on two charges of sexual assault, he had been reinstated to the University of Wisconsin – which had expelled him in March – and then finally on Aug. 23 cleared to play for the Badgers football team by the NCAA.

A week later, Cephus played in Wisconsin’s opener at South Florida – his first game action since Nov. 11, 2017 — and had three receptions for 39 yards. The following week in another Badgers’ blowout win, this time at home against Central Michigan, he caught six passes for a career-high 130 yards.

As Cephus sat in the parking lot, suddenly tears emanated from his eyes and they wouldn’t stop flowing. Even in the down times, Cephus was someone who resonates positivity with a smile nearly permanently attached to his face. But at this moment his guard was let down and the enormity of what he had been through – and what he has went through his entire life – hit home hard.

“I was thrown back into it and it kind of hit me different. I had everything back that I wanted but it was like a big wave,” Cephus recollected. “Because it was just crazy how everything had turned around so fast.”

Overcoming adversity was nothing new to Cephus. He had to make trips to prison to visit his father (“That wasn’t the most comfortable thing,” Cephus said), Andre Taylor, who was released when Quintez was in second grade. He grew up in a neighborhood in Macon, Ga., where drugs and gangs were prevalent. Andre was a part of that life. Quintez was not.

“The neighborhood we were in there was a lot of crazy stuff going on and I had to learn to be a leader and to be different if I wanted anything out of my life,” said the former Badgers wide receiver. “I did. I was always around negativity or whatever you want to call it, but I always had a focus of where I wanted to be.”

Cephus always found solace in sports. When Cephus’ father was killed in April 2017, football was the outlet to help him be distracted. But it also served as motivation.

“That’s something my dad always wanted for me, to be at school and play ball and work hard,” Cephus said. “That’s kind of what I leaned on, I knew where he wanted me to be and I knew the goals we shared with each other. That was just what I was going to continue to do.”

Cephus didn’t have football to rely on when he was involved in his court case. But he could still work out on his own, which he did feverishly, getting into what he called the best shape of his life. That work helped him make a quick transition right back on the football field.

“That was a testament to his character, the fact that he was able to come in and basically not miss a beat,” said former teammate Chris Orr. “I think the best thing about Q is his personality, man, he always has a smile on his face, he’s never really in a bad mood and you can’t ask for much more than that especially for a guy that’s been through so much like he has, especially like his last three years at Wisconsin. He went through some of the most traumatic events of his life.”

Cephus might have been playing but he wasn’t necessarily in football shape. He said it took him until about mid-season until he really started feeling like himself again on the field. The numbers back that up.

In Wisconsin’s first six games, Cephus had 19 receptions for 291 yards. In the Badgers’ final six regular-season games, he had 26 catches for 429 yards. He finished with a flurry, grabbing seven catches for 122 yards against Ohio State in the Big Ten championship and seven more for 59 yards and a touchdown in the Rose Bowl vs. Oregon. Over his last four games, Cephus had 24 receptions for 374 yards and three TDs.

It also helped cement his decision to leave Wisconsin after his junior season and enter the NFL draft.

Cephus said he prayed about the NFL before the year began but it all came down to what he and the team did in 2019. He laid out team and individual goals, the two intertwined. If he had success, Cephus knew the team would, and vice-versa.

He sat down with then-wide receiver coach Ted Gilmore after the season. He had some feedback from the NFL. His age – he turned 22 on April 1 – he said was not a consideration, although it was brought up. A heavy wide receiver class? Nothing for him to be concerned about. What solidified the decision in the end was how he finished up the season.

“I just feel like I’m ready,” he added when asked about his age. “I don’t know what another year would have done but I felt like I was ready now.”

Then came the next adversity in Cephus’ life.

He was invited to the NFL combine and created some buzz after he put up 23 reps on the bench press, the most for any wide receiver. Then came more buzz. Much louder. And much worse. Cephus would run a 4.73 in the 40-yard dash, easily the worst among wideouts.

Cephus had been through bigger ordeals in his life but still he wasn’t immune to the fact this was hurting his stock. However, he had Wisconsin’s Pro Day. He’d train and make it up there.

It nearly didn’t happen, though. Right after Wisconsin held its Pro Day, NFL teams, reacting to the emerging coronavirus, started taking scouts, coaches and general managers off the road. Pro Days were done. Wisconsin just happened to get it in just under the wire.

Cephus’ 40-time of 4.56 at Pro Day wasn’t earth-shattering, but he knew it was essential.

“I needed that and the whole world knew I needed to go out there and run better, and I knew I could run better than I did at the combine … I was happy I was able to get it in before everything got shut down,” he said.

“A lot of teams are just glad I ran better at Pro Day. They love my film and they feel like I run a lot faster on film than I did at the combine, they’re just glad I confirmed it at Pro Day.”

The situation with the coronavirus means Cephus can’t visit teams – he at least had that opportunity at the combine and Pro Day (“It definitely helped me gain some momentum,” he noted) – or do a full workout routine. But he’s still training in Scottsdale, Ariz., with DK Metcalf, watching the Seattle Seahawks wide receiver closely to learn just what it takes to make it and thrive in the NFL.

Despite it being a deep wide receiver class, Cephus is expected to be drafted. The various mock drafts which go beyond the first round are mixed on their evaluation on Cephus. The wide receiver had said he’s hard – and seems to expect – that he’ll be a Day 2 pick (second and third rounds).

Even if Cephus goes later than he anticipates – or, heck, isn’t drafted at all – it will just be another adversity for him to overcome. And he’s already spent a lifetime preparing for and conquering such moments.

“I love what I bring to the table and I feel like I can help a team at the next level,” Cephus said, “that’s really all I can control. Just be the best me that I can be.”

Utah St. comes from behind to beat Fresno St. 57-51 in the regular-season finale

NHL is not planning to quarantine players at training camp