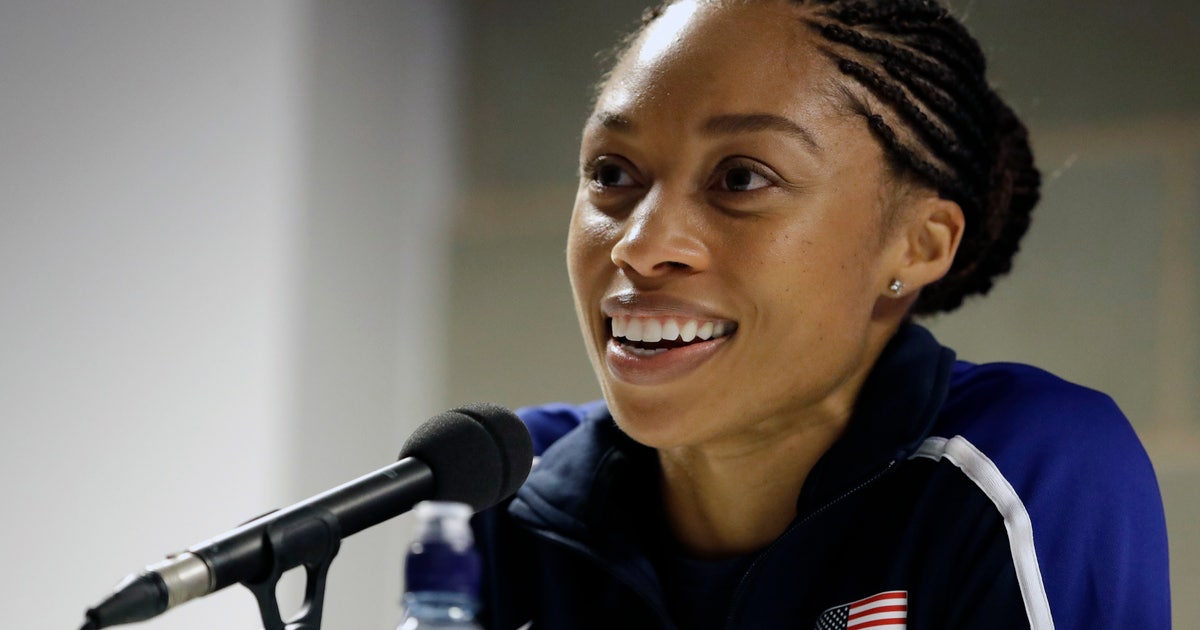 Allyson Felix sometimes “races” a “sprinter” at practice who’s difficult to catch and always seems to have another burst.

Of course, Felix’s 15-month-old daughter, Camryn, does tend to veer outside of her lane.

These days, so does mom.

For years, Felix kept her opinions closely guarded. No more.

The six-time Olympic gold medalist, and the best-known name on the American track scene, is using her platform to orchestrate change. She’s taking advantage of everything from media interviews to appearances on Capitol Hill to speak out about the deals sponsors impose on the athletes they support, to lobby for more protections in contracts for female athletes who give birth and to discuss overcoming racial disparities in the maternal mortality crisis.

That’s the mark she wants to leave as she attempts to make her fifth Olympic team this summer.

“Before, when I thought about legacy, I thought about medals,” said the 34-year-old Felix, who plans to compete in the 200 and 400 meters at the U.S. Olympic trials in June. “Being older, the person I want to be has definitely shifted on all of that.

“I feel like I’m right where I’m supposed to be. I feel stronger than ever, just with everything I’ve been through.”

On Nov. 28, 2018, Felix, only 32 weeks into her pregnancy, delivered her daughter via emergency C-section after tests showed Camryn’s heart rate had dropped to dangerous levels. Camryn weighed in at 3 pounds, 7 ounces.

It’s been a long, bumpy road back to the track.

It’s also paved a new path, too — to highlight some inequities in her sport.

At present, Felix remains without a shoe deal (“but should be soon,” she recently revealed).

Felix’s deal with Nike ran out in December 2017. She wanted to start a family in ’18, but was worried about the ramifications. She explained her situation in a New York Times editorial piece on May 22: Nike wanted to pay her 70% less. Although she was willing to accept a reduction, she wanted assurances around maternity. It was declined.

She followed the likes of Alysia Montaño and Kara Goucher in speaking out about the need for sponsors to support female competitors before, during and after pregnancy — that contracts shouldn’t penalize someone for starting a family. It ultimately led to change: Nike later announced the shoe company planned to alter contracts so female athletes weren’t penalized for childbirth.

“Everyone feels what’s happening,” said Felix, who addressed the Ways and Means committee last spring about the disproportionate risks facing African American women during pregnancy and childbirth. “We want to keep moving forward. There have been so many conversations. I was just talking to Alysia about this the other day. We’re just really united.

“When that happens, special things can take place.”

There would be no better way for the world to truly hear Felix than for her to be a main player at the Olympics later this year. Gradually, she is rounding back into form that helped her capture nine overall Olympic medals.

A big breakthrough for Felix was at the U.S. championships last July, where she finished sixth in the 400-meter final during her first competition in 13 months.

“I feel like my strength and my physical strength and my sprinting are really close,” said Felix, who’s partnering with Northwestern Mutual and talking to advisers to map out her financial future. “I’m really getting big glimpses of where I used to be. That’s been super-encouraging.”

A typical day for Felix means an early wake-up call to feed her daughter breakfast before passing Camryn off to her husband, Kenneth. From there, it’s three hours of track practice with Camryn sometimes making a guest appearance.

“She’s walking and running everywhere now,” Felix said. “We’re trying to keep up with her.”

“She’s not quite staying in her lane,” Felix cracked. “So that might add a few more seconds. But she’s out there trying.”

After practice, it’s two more hours in the gym, chiropractor/massage appointments, media/business obligations and then home for dinner followed by helping put Camryn to bed.

“And then get ready to do that all over again,” Felix said.

During the indoor season, Felix ran a few 60-meter races just to get her rhythm back. She hasn’t competed in a 200 race — her signature event — since July 2017.

The early season races were also a chance to give her longtime coach, Bob Kersee, some film to gauge where she’s at in her preparation.

“As long as I’m healthy and feeling good, I definitely want to do both,” Felix said.

There’s no question about this: She will bring Camryn to Tokyo should she make the team.

“It would just be so special because of all it represented to get there,” Felix said. “It’s really been a great journey for me, learning and getting stronger and finding myself more — and my voice. I’m grateful for all the stuff along the way, but having that moment in Tokyo, I wouldn’t even be able to compare it with anything else.”

Connected Tobacco Cessation Solutions – The ‘SMOQUIT’ Supports Those Looking to...