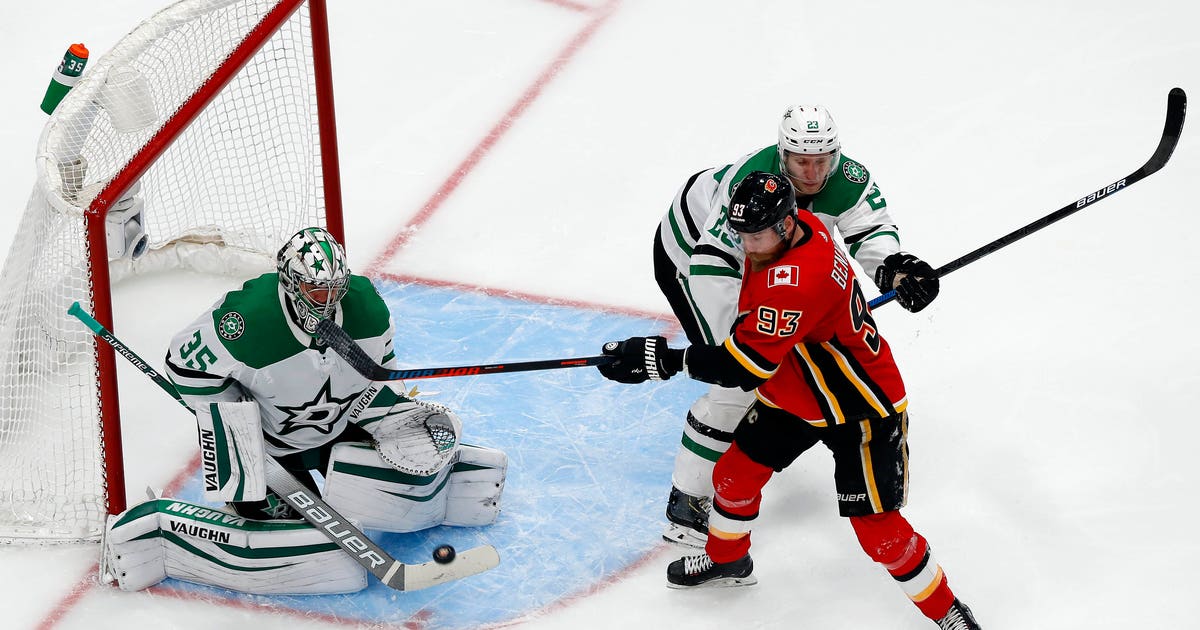 EDMONTON, Alberta (AP) — Mikael Backlund scored Calgary‘s second short-handed goal in as many nights, Cam Talbot stopped 35 shots in his second shutout this postseason and the Flames beat the Dallas Stars 2-0 on Friday night to take a 2-1 series lead in their Western Conference playoff series.

The goal by Backlund in the second period hit the stick of goalie Anton Khodobin, who couldn’t get the puck in his glove before it fell back onto the pads of his left leg, hanging there briefly before falling to the ice and rolling over the line.

TJ Brodie scored on a 50-foot slap shot through traffic midway through the third period for Calgary.

Game 4 of the best-of-seven series is Sunday.

Khodbin, who stopped 21 shots, was pulled with just over 3 minutes left so the Stars could have an extra skater.

Dallas had several near-misses in that late stretch. They also came up empty when birthday boy John Klingberg was unable to convert on a power play in a strange sequence when the Stars were about to go on a power play with 38 seconds left in the second period before a delay because of some broken glass.

Officials sent both teams to the locker room for the second intermission while arena workers replaced the glass near the Dallas bench. It was shattered when frustrated Stars forward Blake Comeau slammed his stick against it when coming off the ice.

After the intermission, the final 38 seconds of the second period were played, with Klingberg’s miss coming before the horn. The teams then had a short break and switched sides before playing the third period.

Calgary became the first team since the San Jose Sharks in 2008 to score short-handed goals in consecutive playoff games.

Tobias Rieder scored a short-hander for Calgary in Game 2, which finished about 22 hours before the start of Game 3, which was delayed briefly because it was the third game of the day in Edmonton. Rieder’s goal came when the Flames erased a two-goal deficit to tie the game late before Jamie Oleksiak‘s goal in the final minute gave Dallas a 5-4 win.

Dallas had some early chances, with Seguin’s shot only two minutes into the game hitting the crossbar at the top of the left post and Alexander Radulov then missing the open net on the right side with Talbot still not back in position.

Seguin came close again later in the first period, with a shot up and off the arm of Talbot and over the net. That was the second of four shots the Stars had during a power play that start with Klingberg, on his 28th birthday, taking a quick slap shot into the gut of the goalie.

NOTES: The Flames played without LW Matthew Tkachuk, who seemed out of sorts when he skated off the ice and then left the bench early in the third period of Game 2. He banged heads with both Jamie Benn and Oleksiak after getting caught in a collision between the two. …. It was Talbot’s fourth career playoff shutout. … After the Stars didn’t have a shot on goal in the final eight minutes of the first period, they had a 16-4 advantage in the second period, when Calgary didn’t get a shot in the final 11 minutes.

Functional Tech-Friendly Liner Gloves – The Point6 Base Glove is Made with Nylon and...