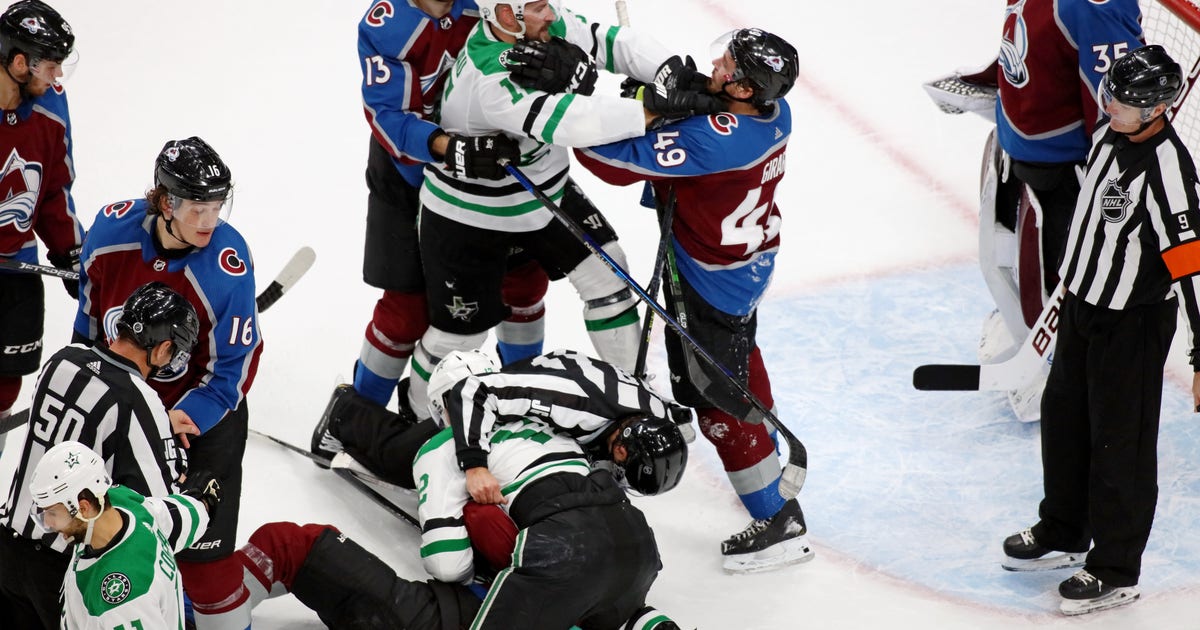 EDMONTON, Alberta (AP) — Pierre-Edouard Bellemare began a five-goal scoring spree in the first period and the Colorado Avalanche avoided second-round elimination with a 6-3 victory over the Dallas Stars in Game 5 on Monday night.

The Avalanche trail the Stars 3-2 in the best-of-seven series. They’ve never won a series in team history when facing a 3-1 deficit.

Andre Burakovsky, Nathan MacKinnon, Nazem Kadri and Mikko Rantanen also scored in a 2:36 span for Colorado in a high-flying first period. The five goals tied the franchise postseason record for a period.

Burakovsky added another in the second. He also had an assist.

Colorado goaltender Michael Hutchinson made an unexpected start as he stepped in for Pavel Francouz. Hutchinson earned his first NHL playoff victory by turning back 31 shots.

Stars starting goaltender Ben Bishop surrendered four goals before being replaced by Anton Khudobin with 6:17 remaining in the first. Despite being deemed “unfit to play” after the morning skate, Bishop surprisingly made his first appearance in net since Aug. 13.

Miro Heiskanen and Joe Pavelski scored second-period goals. Jamie Benn added another late in the third period and Denis Gurianov had three assists for a Dallas team looking to advance to the Western Conference finals for the first time since 2008.

Avalanche coach Jared Bednar noticed a different demeanor from his squad all morning.

“Our team has a little snarl on,” he explained.

They played with a chip, too.

Colorado had as many goals in the first period (five) as Dallas had shots (five).

Bellemare ignited the offense with a tally 4:37 into the game. They scored the next four in a 2:36 span, which was the second-fastest four-goal flurry by one team in a single playoff game in NHL history. The record is 2:35 by Montreal in Game 5 during the 1944 semis against Toronto, according to the league.

The game turned chippy with Colorado out to a big lead. Blake Comeau and Pavelski were sent to the locker room in the third period after misconduct penalties.

Hutchinson became the third different goaltender to start for Colorado in this series. He made his NHL playoff debut in a relief role during Game 4 on Sunday, stopping all three shots he faced.

The 30-year-old Hutchinson was acquired in a February trade with Toronto. He played in one game for Colorado during the regular season — on March 2, which happened to be his birthday. He earned a 2-1 win at Detroit.

Stars interim coach Rick Bowness is making a compelling case to be the full-time coach. Not that he gives it much thought.

NOTES: Stars D Andrej Sekera briefly left in the second period when he took a puck to the side of his head. … Pavelski has 56 career goals in the Stanley Cup playoffs, which ranks third-most by a U.S.-born player. … The Avalanche were without forwards Joonas Donskoi and Matt Calvert, defenseman Erik Johnson and goaltender Philipp Grubauer due to unspecified injuries. … Hunter Miska was the backup goaltender over Francouz. … The last time Colorado/Quebec had five goals in a period was April 19, 1982, in the second against Boston. The team was then located in Quebec.

Preview: Heat square off against Pacers in Game 2 of series

‘This Week’ Roundtable: Can WH Actually Do Anything About Supply Chain...