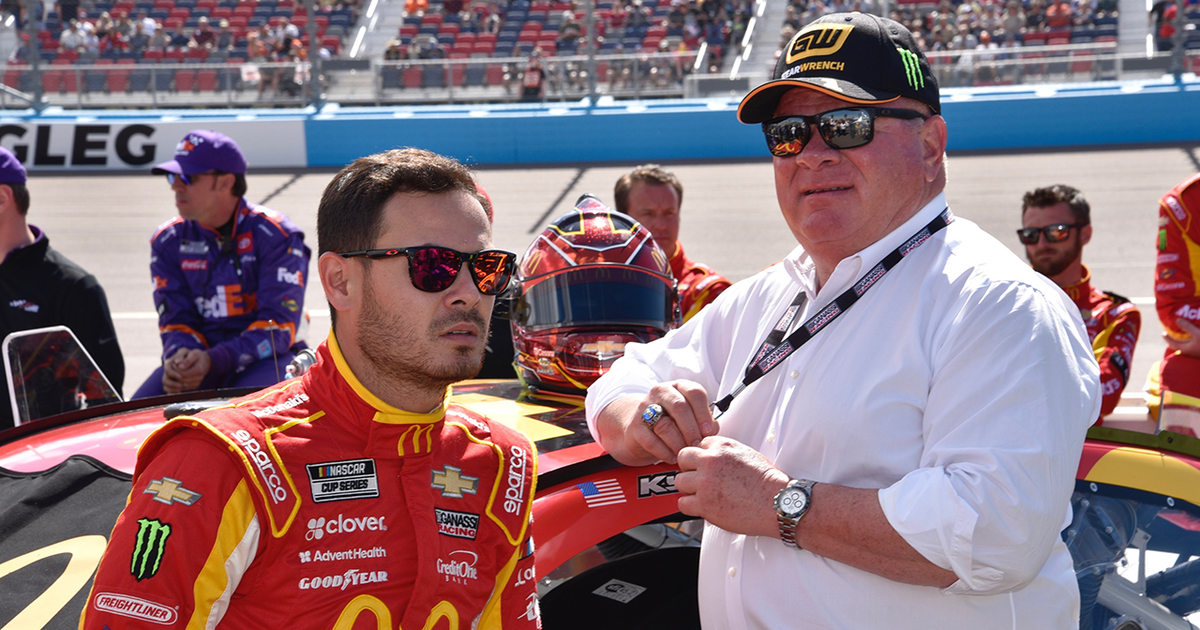 Chip Ganassi faced a decision Monday morning on whether he should fire Kyle Larson for using a racial slur Sunday night on what Larson thought was a chat on a private iRacing channel.

The decision was made for Ganassi by late Monday afternoon.

Updated story with both Credit One and McDonald’s terminating relationships with Kyle Larson: #nascar @NASCARONFOX https://t.co/CinB2ohqve

Once Credit One Bank and McDonald’s announced they were terminating any relationship with Kyle Larson, Ganassi saw all but a few races of sponsorship gone for the rest of the season for the No. 42 car if Larson remained the driver.

Ganassi had to try to save the sponsorships, and the only way to do that was to release Larson.

“After much consideration, Chip Ganassi Racing has determined that it will end its relationship with driver Kyle Larson,” the team said in a statement. “As we said before, the comments that Kyle made were both offensive and unacceptable especially given the values of our organization.

“As we continued to evaluate the situation with all the relevant parties, it became obvious that this was the only appropriate course of action to take.”

Larson said the slur when trying to see if his crew chief or spotter could hear him on his iRacing channel during a non-NASCAR virtual race Sunday. His comments instead aired over the driver chat, which other drivers were streaming live.

“You can’t hear me?” Kyle Larson said before a pause and saying “Hey, [racial slur].”

The 27-year-old Asian American, who was part of NASCAR’s Drive for Diversity program as he transitioned from primarily racing sprint cars to NASCAR, probably knew the chances of keeping his ride were slim Monday.

“I made a mistake and said the word that should never, ever be said,” Larson said Monday. “And there’s no excuse for that. I wasn’t raised that way. It’s just an awful thing to say.

“I feel very sorry for my family, my friends, my partners, the NASCAR community and especially the African-American community. I understand the damage is probably unrepairable, and I own up to that.”

Maybe if the economic times were better, the sponsors might have had more willingness to take time to gauge the impact on their businesses rather than make a quick decision. But that’s a big ‘if.’ Major companies that rely on positive public perception can’t be perceived as endorsing someone who used the slur and the longer they waited to take action, the more the companies would be scrutinized.

Even if the sponsors had not made the decision quickly, Ganassi might have seen a benefit in just parting ways with Larson. With Larson’s contract scheduled to end after the 2020 season, Ganassi faced a situation where the team could have spent significant time and effort (and possibly risk its reputation) in trying to keep a driver — a driver who has finished between sixth and ninth in the regular-season standings in each of the last five years — only to see him leave for another team in 2021.

In essence, Ganassi could have done all the work to help Kyle Larson rebuild his reputation and then have another team enjoy the results of the efforts for many more years.

So what now? Those sponsors appear to be willing to remain at CGR with another driver. If CGR hires a driver at a lower salary than Larson, CGR conceivably could accept less money in sponsorship fees – a way to mitigate the damage done by the Larson slur as well as help the companies in this economic climate — if it could still fund the building of the cars at a level to perform well.

It would appear that Ross Chastain, who still has a contract with Chip Ganassi Racing, is a solid candidate to fill that seat. He won a race in an Xfinity Series car with Ganassi in 2018. He drove for the team in the Daytona 500 and had at least another race on his schedule.

If CGR opts to make permanent change, should be noted that Ross Chastain has run every Cup race this year so he is eligible to run for the Cup title. He would have to change eligibility of the series he earns points & would have zero points going into next Cup race. @NASCARONFOX

Chastain currently has a deal with Kaulig Racing and has said his focus was winning an Xfinity Series championship there, while he also has substituted for the injured Ryan Newman in the last three Cup races.

Because he has competed in every Cup race this year, Chastain would still be eligible for the Cup playoffs. He would have to move his declaration for points from Xfinity to Cup and would start with zero points, giving the rest of the field a four-race head start.

That would require permission from Kaulig Racing, and sponsor Nutrien Ag Solutions, which Chastain helped bring to the team as the company views the Chastain family watermelon farm as a key element to its sponsorship. If he changed from Xfinity to Cup points, Chastain could run the majority of Xfinity races except for the Dash 4 Cash races, the final eight races (the regular-season finale and the playoff races).

If Ganassi is willing to give up the idea of a driver championship on the No. 42, it also could have Chastain run the majority of the races while missing some that conflict with Xfinity. It is unknown until NASCAR releases an updated schedule just how many conflicts there would be for a driver trying to run as many races as possible in both series.