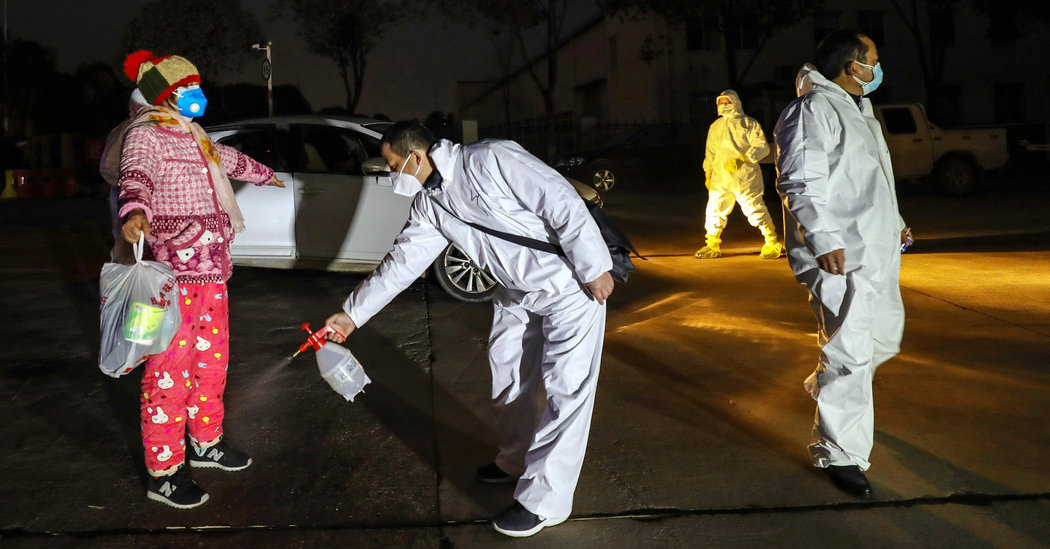 A lot of epidemics seem to come out of China, leading some to point accusing fingers. President Trump’s trade czar, Peter Navarro, for one, once went so far as to describe the country as a “disease incubator,” and that was before the latest outbreak.

But those perceptions are outdated.

While some of the most serious outbreaks have been traced to Chinese origins, others associated with China may have started elsewhere.

Old stereotypes have also contributed to unfounded portrayals of China as a source of contagion, when in fact it has progressed further than many countries in eradicating scourges that can flourish in developing regions.

Still, China’s recent history of what are known as zoonotic infections — viruses, bacteria and parasites that spread between animals and humans — has raised questions about public-health practices in the world’s most populous country.

And while the Chinese government has strengthened disease detection and monitoring capabilities, its tendency to play down or even cover up mass outbreaks may play a role in their severity and scope.

Dr. Jennifer Huang Bouey, an epidemiologist and senior policy researcher at the RAND Corporation, a research organization, said China had become a leader in the study of contagious disease. The flu vaccines provided in the United States, for example, are often traced to research done in China.

At the same time, Dr. Bouey said, China remains somewhat of a laboratory itself.

“There is quite a fair amount of epidemics originating in China or passing through China,” she said.

Here are five basic questions and answers on China and infectious diseases.

Q: What epidemics have been traced to China?

Two of the devastating flu pandemics of the 20th century — the Asian flu of 1957 and the Hong Kong flu of 1968 — both originated in China and left a trail of about three million deaths worldwide.

The 2003 epidemic of Severe Acute Respiratory Syndrome, or SARS, which killed 774 people, nearly all of them in mainland China, was traced to palm civets sold as exotic meat in southern Chinese food markets.

The virus behind a deadly 1997 bird flu outbreak that fatally infected at least 18 people in Hong Kong is believed to have originated among fowl raised in southern mainland China — the source of virtually all poultry in the Chinese territory.

Last year, nearly half of China’s pigs were wiped out by a virus that causes African swine fever, an incurable disease. While the virus does not sicken humans and did not originate in China, critics say Chinese government policies and mismanagement may have inadvertently helped the epidemic accelerate through the country’s pig population — the world’s largest — and spread elsewhere in Asia.

And as of Monday, the new coronavirus traced to a live-animal market in the central Chinese city of Wuhan had killed 908 people and infected more than 40,000 in China and two dozen other countries and territories. The coronavirus, so named because of its spiky halo look under a microscope, may have originated in bats.

Q: Why might China be at special risk for zoonotic infections?

Many epidemiologists point to some fundamental facts about China: its population of 1.4 billion people, the proximity of urban and rural dwellers, as well as the slaughterhouses and urban markets where animals are freshly butchered. Fourteen of the world’s 50 most populous metropolitan areas are in China.

“The Chinese economy, combined with the Chinese population, have experienced so much growth that you are looking at putting large numbers of people in close contact with large numbers of animals in a confined space,” said Sean Beckmann, a disease ecologist and biology professor at Stetson University in DeLand, Fla.

Dr. Beckmann called China “the perfect storm” for zoonotic diseases to flourish. “It gives lots of opportunity for these viruses to cross a species boundary,” he said.

Q: Is China the only source of zoonotic infections?

The Ebola virus, for example, which has ravaged parts of central and Western Africa, is named after the Ebola River in what is now the Democratic Republic of Congo, where the virus was discovered. It may have been transmitted by fruit bats.

The Marburg virus, which causes a hemorrhagic fever similar to Ebola’s, was also traced to a virus that resides in African fruit bats. It was named after a town in Germany where it was first detected in laboratory workers in 1967.

And Middle East Respiratory Syndrome, or MERS, has been traced to camels and bats in Saudi Arabia. It is similar to SARS and has killed at least 858 people and sickened nearly 25,000 in 27 countries since it was first reported in 2012.

Q: Has China been unfairly singled out?

Chinese officials say yes, and point to what they call an overreaction by the United States and other countries to the coronavirus epidemic. Those countries have imposed virtual travel bans to China and evacuated citizens.

The Chinese government also has denounced incidents of anti-Chinese hostility linked to the epidemic.

“I do not want to see this,” Huang Ping, China’s consul general in New York, said at a news conference last week. “The virus is the enemy, not the Chinese people.”

There is, in fact, a long history of China being stigmatized over disease.

In the 19th century, a wave of immigration from Asia prompted warnings of a “yellow peril” and a supposed threat to public health.

Echoes of that are still sometimes heard. In late January, a French newspaper ran a Page 1 story headlined “yellow alert” about the “Chinese coronavirus.” It later apologized.

There are those who have tried to blame China for some of the biggest public health calamities of all time.

Some historians claimed that China was the likely source of the deadliest flu pandemic in history, the 1918 Spanish Flu — a misnomer itself. The effects of that flu were global. It was associated mainly with Spain because Spanish news reports about the disease, unlike those in countries fighting in World War I, were not censored.

In fact, the origin of the pandemic remains a mystery. Some research suggests that it may have been a United States military training base in Kansas, Camp Funston.

Q: Why has the Chinese government tended to minimize or even cover up outbreaks?

The Chinese Communist Party is most fearful of the sort of chaos that has historically destabilized China. Party officials tend to prioritize stability, even if it means suppressing important information that, critics say, the public needs to know.

The latest example of this may be Dr. Li Wenliang, a Wuhan physician who was punished for having warned early in the outbreak about what he saw as SARS-like cases — and who died last week from the infection. And until very recently, the government also declined repeated offers by international disease experts to send teams to China to help battle the outbreak.

Many infectious disease experts say they hope the leaders in Beijing learn from Dr. Li’s death.

“You want to have doctors who are empowered and encouraged,” said Dr. Amesh Adalja, a senior scholar at Johns Hopkins University. “You want to reward these types of people. In their effort to manage chaos and silence astute doctors, I would argue the government took a shortsighted action and it had a cascading impact.”

Some remain skeptical that the central authorities in Beijing will change their behavior.

Yanzhong Huang, a senior fellow for global health at the Council on Foreign Relations, said the official tendency to control and suppress remained strong.

“This is a pattern,” he said, “essentially, fundamentally the same: cover-up, inaction, then the central government steps in and takes draconian measures. This is like a Greek tragedy.”