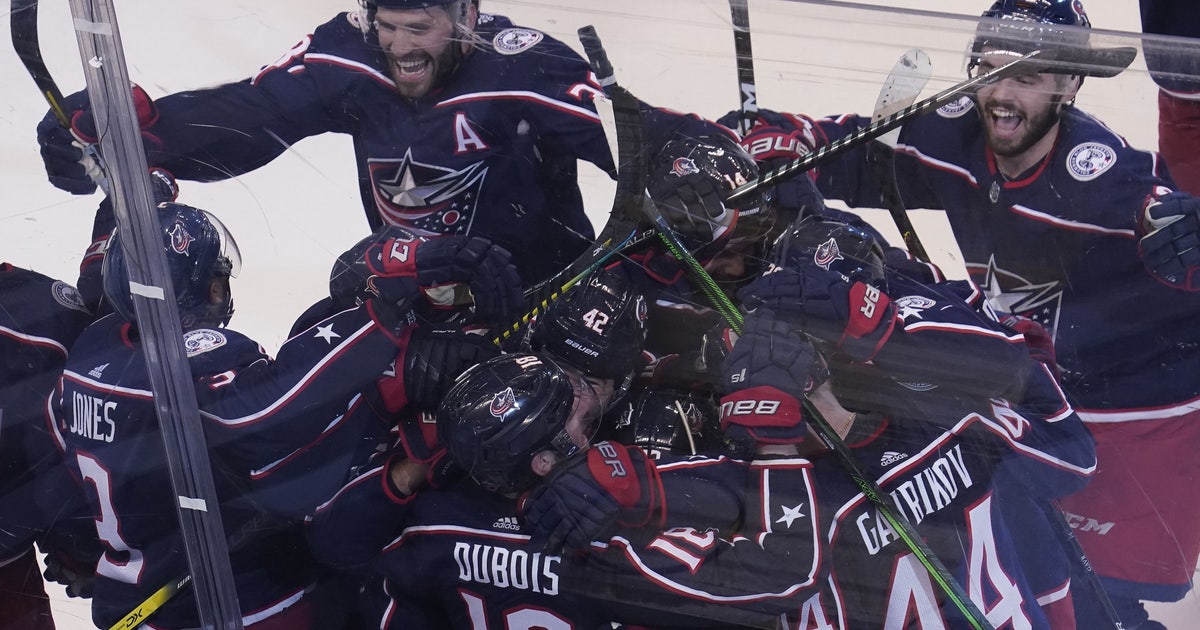 TORONTO (AP) — Pierre-Luc Dubois got his third goal of the game 18:24 into overtime, finishing the Columbus Blue Jackets comeback from three goals down to beat the Toronto Maple Leafs 4-3 on Thursday night and take a 2-1 lead in their playoff qualifying series.

Dubois got the winner on a rush after Alexandre Texier stripped the puck from Toronto’s John Tavares.

“(Texier) got it, that’s the only thing I remember, ” Dubois said. “He made a nice play, didn’t pass it right away. The puck, he was patient with it and passed a nice little saucer up the middle of the ice, got me free on the breakaway It was a hell of a play by him.”

🚨 AND PIERRE-LUC DUBOIS TIES IT UP!!! 🚨#CBJ pic.twitter.com/OYJ3j2LxzA

Seth Jones also scored for Columbus. Joonas Korpisalo gave up all three Toronto goals and made 12 saves before he was chased in the second period. Elvis Merzlikins stopped all 21 shots he faced to put the Blue Jackets one win from advancing to the traditional 16-team first round.

Dubois — who was in a shouting match on the bench with Blue Jackets coach John Tortorella in their Game 2 loss — started Columbus’ comeback as he scored from the bottom of the right circle with 8:21 left in the second.

Jones made it 3-2 with a wrist shot from the right circle over Andersen’s shoulder at 7:28 of the third, and Dubois tied it on a rush with 9:11 remaining in regulation.

Seth Jones sneaks one in! And we’ve got a one-goal game!#CBJ pic.twitter.com/AvgaAjLpqL

“We stayed with it, started playing some good hockey late second, third period and found ourselves back in it,” Jones said. “Overtime wasn’t our best, but we found a way to stick together, play some solid defense, block some shots and when we got a chance (Dubois) didn’t miss.”

Toronto got a break on a first-period Columbus power play when Ceci’s shot from the right point was deflected in off the ankle of defenseman Jones.

Nylander scored from the doorstep off a feed from Mitch Marner 10 seconds into a power play at 7:08 of the second. Robertson, an 18-year-old rookie, got his first NHL goal when his shot from the left circle hit Korpisalo then tricked through his legs and across the line at 8:48, chasing the starting netminder.

“It gave us a chance to catch our breath,” Columbus coach John Tortorella said of the goalie switch. “I think that’s one of the biggest things. We needed to stop and slow it down it down a little bit because it was getting away from us.”

“I trust them. They’ll be ready to go tomorrow.” pic.twitter.com/gaA5thlwg7

Toronto saw a different Columbus team than in the Game 2 shutout in which the Blue Jackets struggled to sustain any offensive pressure.

“Just erase it,” Leafs coach Sheldon Keefe said. “I mean we’re a team that has bounced back all year when things didn’t go our way. The boys showed up the next day and played our hearts out. We’ve got to refocus and get ready.”

NOTES: Ceci’s only goal of the regular season also came against the Blue Jackets. … Dubois’ hat trick was the first in Blue Jackets playoff history. … Toronto was without D Jake Muzzin, who left Tuesday’s game on a stretcher after his head made violent contact with Oliver Bjorkstrand’s knee. He is out of the hospital and back with the team but unavailable for the rest of the series. Martin Marancin skated in his place.

Russell Wilson stays busy on and off the NFL field

Week-Long Battery Life Smartwatches – The Redmi Watch Delivers Up to...