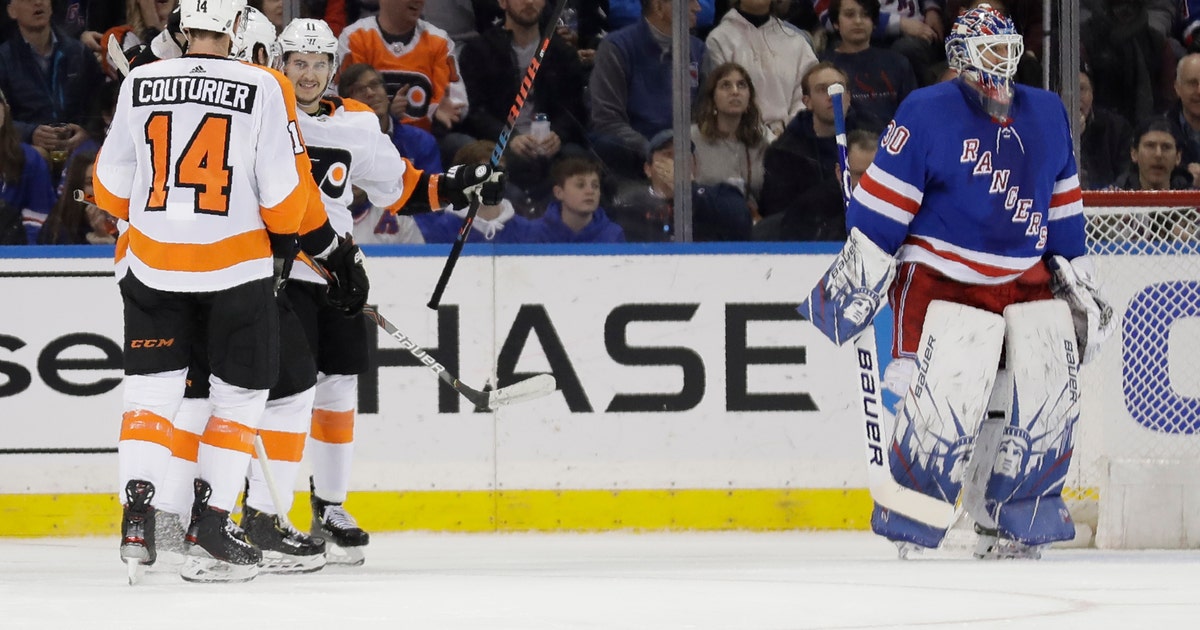 Carter Hart made 23 saves and the surging Philadelphia Flyers extended their winning streak to a season-high six games with a 5-3 victory over the New York Rangers on Sunday.

Matt Niskanen, Sean Couturier and Travis Konecny each scored power-play goals. Michael Raffl scored short-handed and Derek Grant also tallied for the Flyers, who swept a home-and-home series against the Rangers after winning 5-2 on Friday night.

The Flyers’ run combined with the Penguins‘ six-game slide has moved Philadelphia into second place in the Metropolitan Division.

Henrik Lundqvist made his first start since Feb. 3 and made 21 saves for New York.

Mika Zibanejad scored two power-play goals and Pavel Buchnevich also tallied on the man advantage for the Rangers. Zibanejad has a career-high 32 goals on the season.

ST. PAUL, Minn (AP) — Alex Ovechkin scored twice as part of a three-point night and the Washington Capitals ended a four-game road slide by holding off the Wild.

Richard Panik and Tom Wilson also scored, Evgeny Kuznetsov had two assists, and Braden Holtby stopped 37 shots for his fourth straight victory. Washington moved into a tie with Colorado for the league lead with 22 road wins.

Ryan Donato, Kevin Fiala and Zach Parise scored for the Wild. Alex Stalock made 26 saves, but Minnesota lost for the first time in four games and remains one point behind Nashville, Winnipeg and Arizona for the second wild-card spot in the Western Conference.

The Kings, in last place in the Pacific Division, snapped Vegas’ franchise record-tying eight-game win streak. The Golden Knights hadn’t lost since a 4-0 defeat in Minnesota on Feb. 11.

Petersen, who improved to 2-0-0 against Vegas, was brilliant in stifling the Golden Knights’ normally potent offense that clearly was missing Mark Stone, who is week-to-week with a lower-body injury. Of his 42 stops, 19 came in the third period.

Trevor Lewis and Alex Iafallo also scored for the Kings.

Shea Theodore scored for Vegas, while Marc-Andre Fleury made 13 saves.

ANAHEIM, Calif. (AP) — Pavel Zacha scored two power-play goals and Cory Schneider made 34 saves for his first shutout in more than a year to lift New Jersey to the win.

Nico Hischier had a goal, Nikita Gusev had an assist to extend his point streak to six games, and the Devils extended their streak of games earning a point to six. New Jersey is 4-0-2 in that span, matching a 3-0-3 stretch from Jan. 27-Feb. 8 as its longest of the season.

John Gibson made 31 saves for the Ducks, who could not put together their second three-game winning streak of the season.

Riley Nash and Gustav Nyquist also scored in the third period for Columbus, which ended a two-game skid and moved three points ahead of Carolina for the second Eastern Conference wild card. It was the Blue Jackets’ first regulation win since Feb. 7 and their second victory in 11 games.

Bo Horvat, Elias Pettersson and J.T. Miller scored for Vancouver, and Louis Domingue stopped 30 shots in his first appearance since being acquired from New Jersey at the trade deadline. The Canucks have dropped three in a row and six of their last seven games on the road.

SUNRISE, Fla. (AP) — Cam Talbot made 38 saves, and Johnny Gaudreau had a goal and an assist to lead Calgary past Florida.

TJ Brodie and Milan Lucic also scored for the Flames, and Mark Giordano had three assists.

Sam Montembault stopped 25 shots for the Panthers, who have lost a franchise record seven straight home games. The Panthers are 5-11-2 since the All-Star break.