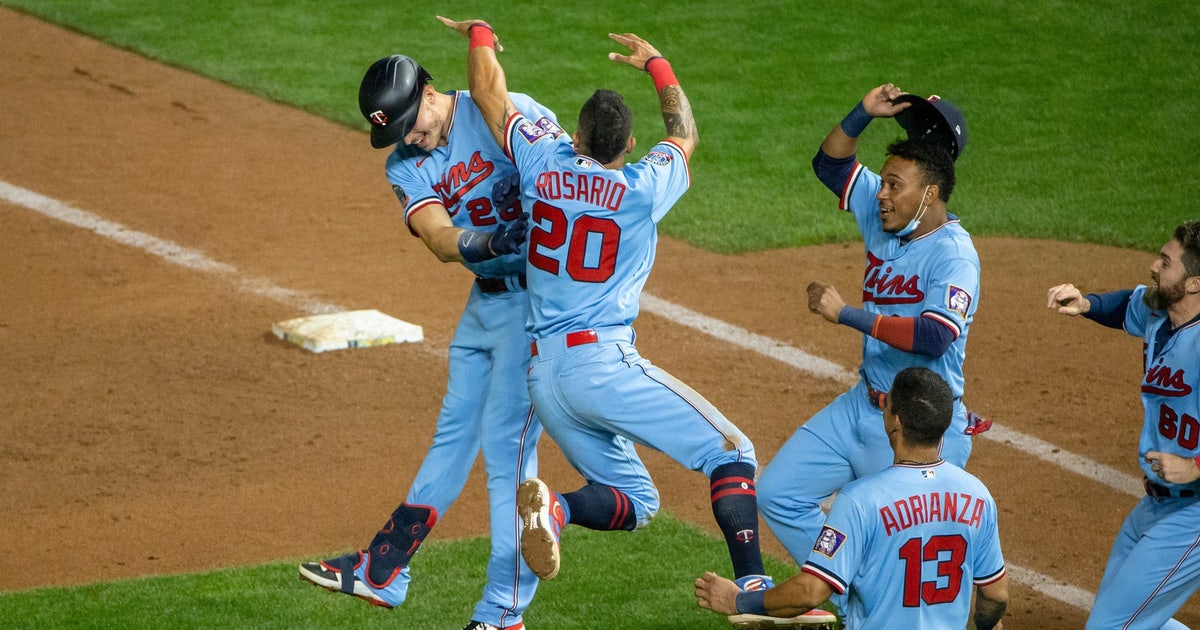 MINNEAPOLIS — As a gift from third baseman Josh Donaldson, each of the Minnesota Twins now have dark blue jersey-style bathrobes with their name across the back.

Nelson Cruz even started draping his over the shoulders of each teammate who hit a homer. With the division race as tight as ever and a first-round home series on the line, the Twins couldn’t be more relaxed in their defense of the AL Central title.

“I can’t wait to lounge in it in the bubble. I’m going to be doing a lot of that from now on,” said Max Kepler, who hit the tying home run in the eighth inning and the game-winning single with two outs in the 10th to give the Twins a 5-4 victory over the Detroit Tigers on Tuesday night.

The Twins pulled to just a half-game behind the division-leading Chicago White Sox.

“With the scoreboard behind us, there’s a few glances in between the pitching changes, where you’re like, ‘All right. Let’s go. Keep this thing going,’” said Byron Buxton, who also homered along with Mitch Garver for the Twins.

Minnesota (34-22) has all four remaining games at home, where the Twins have the best record in baseball at 22-5. They wrap up the regular season by hosting Cincinnati this weekend.

The White Sox (34-21), who squandered a 3-1 lead in the bottom of the 10th inning and lost 5-3 at Cleveland, play twice more against the postseason-bound Indians before hosting a three-game weekend series against the crosstown first-place Cubs. The White Sox hold the tiebreaker over the Twins based on a better intradivision record. The teams split their 10-game season series.

If the Twins don’t retain their division title, they would still host one of the four best-of-three AL wild card series if they stay ahead of the New York Yankees (32-23).

After Jeimer Candelario’s RBI single in the 10th gave the Tigers the lead against closer Taylor Rogers (2-4), pinch-runner Jake Cave promptly scored from second base on Eddie Rosario’s soft single to center to begin the bottom of the inning facing Bryan Garcia (2-1). Then after Rosario stole second base, Kepler put another blooper in just the right place to give the Twins another dramatic win.

“Baseball is a game you can never give up on,” Kepler said. “You have to keep believing stuff can get done, and stuff like that will happen.”

Willi Castro’s RBI single off Tyler Duffey in the seventh gave the Tigers a 3-2 lead, after they tied the game in the sixth on an error by first baseman Miguel Sanó. Duffey knocked down a bases-loaded comebacker and recovered in time to grab the ball, but his low throw was dropped by Sanó as Castro scored.

Daz Cameron hit two doubles for Detroit, but as he tried to score in the fifth on a two-out single, his helmet came loose and blocked his view as he slowed a bit to try to push it out of his eyes. Rosario nailed him at the plate with a perfect throw from left field.

“It’s a great feeling when you help the pitchers,” Rosario said.

Buxton greeted Tigers starter Tarik Skubal with his second career leadoff home run. Buxton, who batted first for the first time since Sept. 1, 2017, hit a 1-1 changeup for his eighth homer in 12 games.

The Tigers returned to Minnesota without manager Ron Gardenhire, who abruptly retired Saturday due to ongoing health concerns during the COVID-19 pandemic. Gardenhire, who served as skipper of the Twins for 13 years and ran the Tigers for three seasons, was honored with a pregame tribute on the Target Field videoboard. The 62-year-old had to leave the Sept. 5 game at Minnesota early because of a stomach illness.

“We hate to see him go, but there is life after the game, too,” said Tigers pitching coach Rick Anderson, his longtime pal.

The Twins sent right-hander Homer Bailey to the mound after reinstating him from the injured list, following a 51-game absence due to right biceps tendinitis. The 14-year veteran, making just his second start of the season, retired the first nine batters.

Bailey didn’t record an out in the fourth inning, though, and left the bases loaded for Cody Stashak after an RBI single by Miguel Cabrera. Brandon Dixon grounded into the rare 6-2-5 double play with the infield drawn in, and Stashak escaped with the tie intact.

“We had opportunities,” Tigers interim manager Lloyd McClendon said. “But so did they. It happens.”

Tigers: Dixon, who led the team with 15 home runs last year, made his season debut after 2B Jonathan Schoop was transferred to the 45-day injured list with a slow-healing sprained right wrist.

Tigers: RHP Casey Mize (0-2, 6.08 ERA) will take the seventh turn of his major league career on Wednesday night. The first overall pick in the 2018 draft has allowed five runs in seven innings over two starts this year against the Twins.

Adam Schiff: Trump’s Michael Flynn Strategy Is To “Flood The Zone With Excrement”