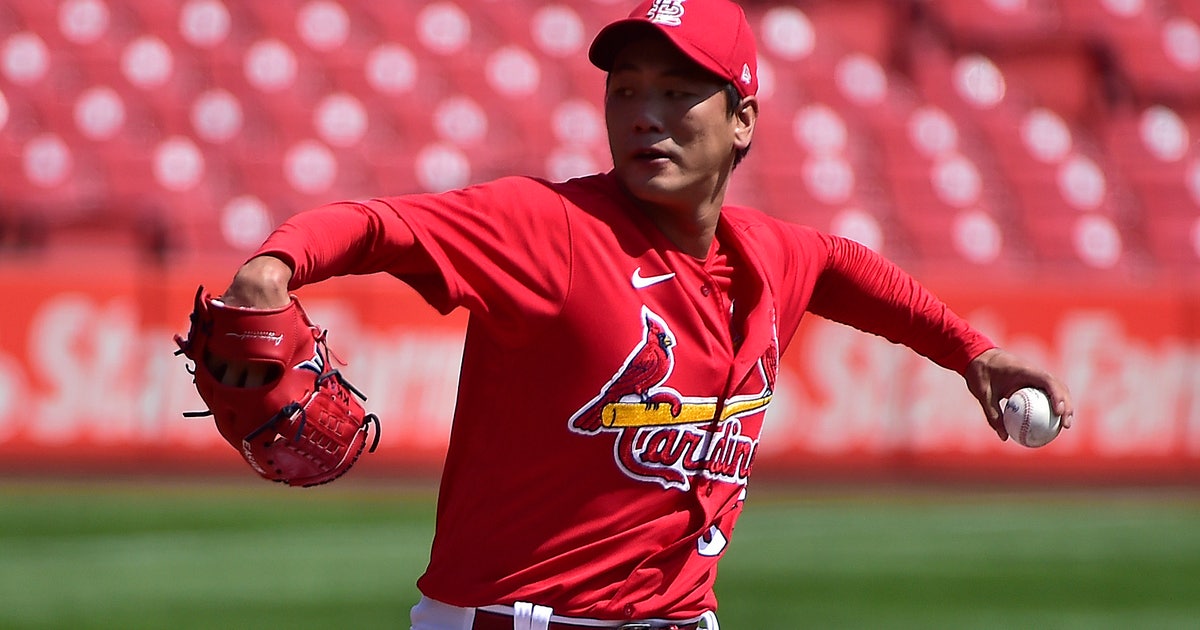 ST. LOUIS — The good news for the Cardinals on Thursday night was that their pitching staff continued to look dominant. The bad news? They were playing an intrasquad game, meaning that their offense continued to struggle.

The biggest standout performer during Thursday’s scrimmage was left-hander Kwang Hyun Kim, who has been battling for a rotation role and could have an especially strong chance of cracking the starting five if Carlos Martínez reprises his role as the Cards’ closer.

Kim threw a five-inning complete game shutout for the road squad, allowing just one hit and two walks while striking out five. He had a huge punch out to end the second inning, stranding the only two baserunners he allowed.

Nice pitch by Kim to escape the second inning, stranding a pair of base runners. pic.twitter.com/Az1joZM6pB

Adam Wainwright, who started for the home team, was also very impressive. While throwing 42 pitches over three innings, Wainwright allowed two hits, no walks and no runs while striking out two. He induced a Dylan Carlson grounder in the second that resulted in an inning-ending double play.

Slick defense gets Waino out of the inning! pic.twitter.com/u5B2NmCh1I

Thursday’s scrimmage featured a total of three hits — two for the road team and one for the home squad — and none of the extra-base variety. Matt Wieters was the only player to reach base twice, collecting a single and a walk, while Austin Dean and Harrison Bader had base hits. The lack of offensive output was the continuation of a trend this summer, as there have been just three extra-base hits in the five intrasquad games the Cardinals have held so far.

There have been three extra base hits total in the intrasquads so far – a DeJong HR, a Bader double, and the Carlson double that doinked off the bag and rolled into a dead spot in center. https://t.co/kJXWFzzcar

With the game deadlocked in a scoreless tie after three innings, the coaching staff fast-forwarded to the eighth — one of the many advantages afforded to teams when they play intrasquad games with no official rules. Both teams were again held scoreless during that inning, which included a two-strikeout frame from lefty Andrew Miller, so they skipped ahead to the 10th. That gave both sides a chance to experiment with baseball’s new extra-innings rules, which feature a runner being placed on second base to begin each frame.

While neither offense really found its rhythm during the extra frame, the new rule had its intended effect, finally breaking the scoreless tie. After Dexter Fowler started on second to start the inning, he was able to advance to third on a Junior Fernandez throwing error, then came home to score on a Tommy Edman fielding error.

Let us track this historic trip around the bases. This baserunner was born on second, didn’t get a double.

He takes third on an E1.

The team’s internal scoring system, which is designed to prevent pitchers from exceeding their pitch counts, forced an end to the top of the 10th after Fernandez threw 29 pitches and got just one out. As a result, two additional runs were added to the road team’s total.

Kim responded with a scoreless bottom of the 10th, clinching a victory for the visiting team.

After the game, center fielders Harrison Bader and Lane Thomas got some work in with outfield instructor Willie McGee.

Harrison Bader and Lane Thomas are standing in center and Willie McGee has a bucket of balls and a ball launching machine at home plate, so this’ll be good postgame entertainment.

Sounds like, from Bader yelling times back toward home, they were working on picking up the ball against the sky at dusk. 8:30-8:45 is apparently not great.

Wainwright only went 3 innings tonight because it lines him up to be the Cardinals #2 starter for the regular season. Which Shildt says he will be.