But he’s in a helluva battle with LeBron James.

“LeBron got that hyperbaric chamber, I got the same chamber coming next week! Ima be in that thang! Oooo better turn up! I might go back to the NFL at age 52 and make my comeback!” — @ShannonSharpe 🤣🤣 pic.twitter.com/MWsXX9WSUR

James, in his seventeenth NBA season, is defying logic and odds and everything else there is to defy.

We’ve seen barely any slippage in his game. He’s aging like fine wine.

James has long been one of the most durable athletes in professional sports, but after suffering his first major injury last season at age 34, there were legitimate questions about whether or not his best days were behind him.

He has responded by playing at an unprecedented level for a player his age, all while carrying the Los Angeles Lakers to the best record in the Western Conference.

But – there’s always a ‘but’ – something has to give, right? This can’t go on much longer.

Through all of his success, it’s fair to wonder if the mileage will eventually catch up to James.

As of now, however, there is no telling when that time or day will come – if it ever comes.

.@ShannonSharpe on LeBron maintaining his high level of play:

“There’s no reason to doubt LeBron physically. He has someone lessening the load in scoring and rebounding…so now he doesn’t have all that on his plate. Of course he can keep it going.” pic.twitter.com/16CxKoeSEm

James, miraculously, has found himself square in the middle of one of the most interesting league MVP races in recent memory.

“LeBron is the MVP. Point-blank. Giannis had his run last year.” — @DaTrillStak5 pic.twitter.com/80zSybevX7

One of the more impressive statistics that is on James’ side in this MVP race – and the GOAT race, to be frank – is how he just keeps breaking records.

And at some point, we have to reward him for that, right?

In fact, what James is doing is unprecedented compared to the other top five scorers in NBA history and where they were at the same stage in their careers. 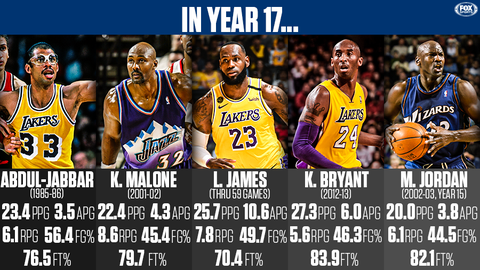 Only the late Kobe Bryant averaged more points than James in his seventeenth season, while James is the only player in the league’s top five all-time scorers who averaged a double-double at this point in their career.

James is still capable of being the best player on the floor at age 35, as evidenced by his dominance in consecutive wins over the Bucks and Clippers this past weekend.

Leading the @Lakers to a 3-0 record during Week 20, @KingJames was named Western Conference Player of the Week! #LakeShow

All good things come to an end, and that will remain true with James.

But Father Time might have to break a sweat with this one.

Tom Bevan: Most Media Ignored Polls That Didn’t Fit Preconceived Narratives, “There Has To...

Schiff: There Is “A Lot Of Interest In Congress” In Hearing What John Bolton...