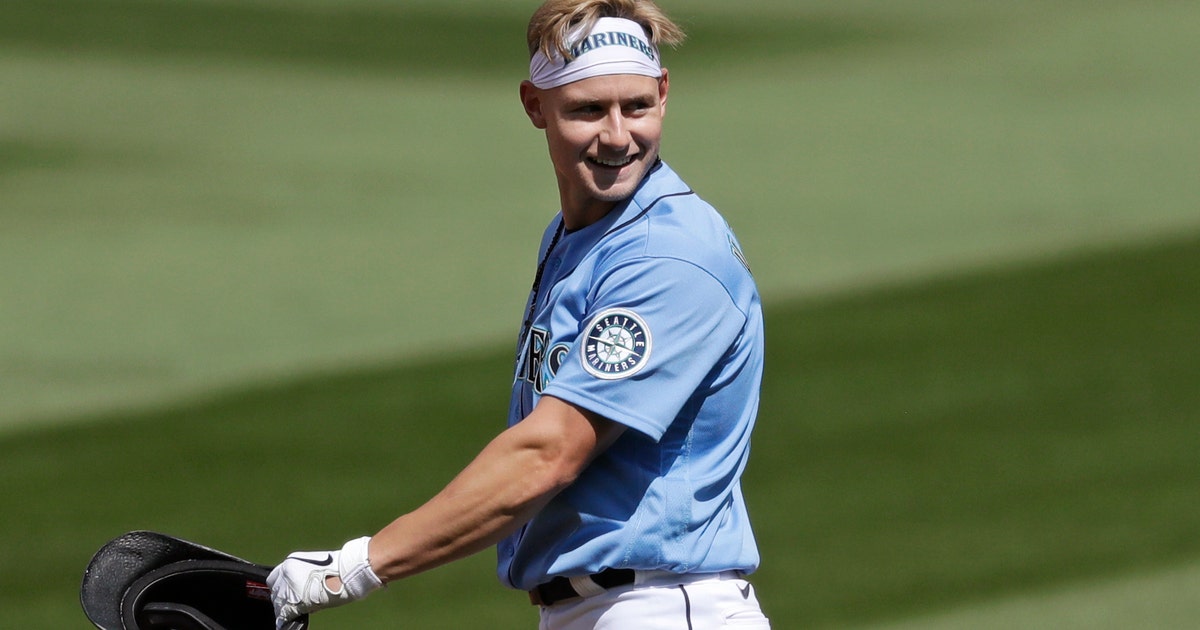 SEATTLE (AP) — Even though he only turned 21 this week, Seattle Mariners outfielder Jarred Kelenic doesn’t lack for confidence. Or swagger.

Just listen to him talk about the first of two home runs he hit during an intrasquad game.

“The first one I was looking for something soft. I didn’t think his fastball was going to beat me. I wanted to stay through the left side of the field with it and was just going to take the approach of a fastball that I was going to just react to it, especially if it was in and that’s kind of what happened,” Kelenic recalled.

“I believe I took a first-pitch curveball that I thought was a ball, and the next pitch was a fastball and I reacted. I got the head out and, smell ya later.”

Even during a shortened 60-game season, the Mariners will be completely focused on their future. While they want to succeed at the major league level, the development of the prospects on the taxi squad stationed at Seattle’s Triple-A affiliate will be of equal importance.

Kelenic is at the head of the prospect list, which also includes catcher Cal Raleigh, pitchers Logan Gilbert, Emerson Hancock and George Kirby and shortstop Noelvi Marte. Outfielder Julio Rodriguez, ranked among the top 20 prospects in baseball, would have been among them, too, until he fractured his wrist during summer camp. The injury will likely sideline him for more than a month.

In some ways, the development of players on the taxi squad may be of more interest than the big league club’s wins or losses. The Mariners believe they’re already seeing some benefit from having those players around during summer camp.

“The opportunity to have the young players here, experiencing this, intermingling with our major league club and staff getting familiar with T-Mobile Park, it’s really such a unique situation we’re all in right now,” general manager Jerry Dipoto said. “This is one of the real silver linings is what this could do for the development of a young group like we have.”

Kelenic was the key component of what Seattle received from the Mets in the trade that sent Robinson Cano and Edwin Diaz to New York. He’s rated as the No. 11 overall prospect in baseball by MLB.com.

He’s good, and he knows it.

Kelenic said he spent baseball’s shutdown working out at home and showed up for summer camp noticeably stronger. His regime of hitting, lifting and sprinting for several months fit Kelenic’s mindset of being almost exclusively focused on his career.

Kelenic was already generating attention after hitting .291 with 23 homers and 68 RBIs with three different minor league teams last season. S ome of his swings during summer camp, including his two home-run performance in the intrasquad game, have gone viral on social media.

The buzz surrounding Kelenic has raised questions about whether he’d be better off playing at the major league level during the short season. Would it be more beneficial for his career development — and for some of Seattle’s other top prospects on the cusp of the majors — if they played in major league games rather than in intrasquad games?

“He’s just a good baseball player. And when you see him in this environment, he fits,” Dipoto said. “You see him out there and it looks like he belongs.”

But there is a practical side. Dipoto and manager Scott Servais have said they don’t want their prospects moving back and forth between the majors and minors. When they’re ready for the majors, they want them to have the best chance of sticking.

There’s also the service time issue. Depending on when Kelenic makes his debut, it could be the difference between Seattle having club control through 2025 or 2027. It’s likely to be a consideration for all of the Mariners’ prospects, especially since the club isn’t likely to be a contender until 2022.

But that means patience. For Kelenic, that can be a challenge.

“My expectations are so much higher than everyone else’s and that’s really got me here,” Kelenic said. “It’s gotten me to where I am and it continues to push me day in and day out to be the best.”