Major League Baseball is on the cusp of making changes to its playoff system.

And let’s just say the MLB is swinging for the fences.

MLB reportedly planning to change postseason format from 5 to 7 teams per league.

– Wild card game would go away
– First round would become best 2-of-3
– Top seed in each league gets a Bye
– Teams with best records would pick their opponents.
(via @Joelsherman1)

Ok. Let’s make sense of it together. 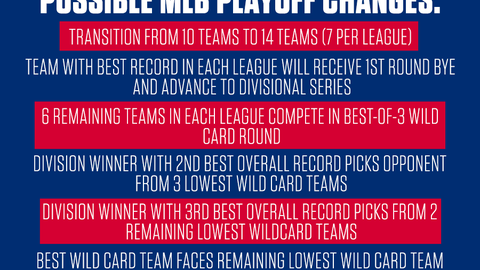 Do we get it now?

Ok. Let’s think of it as seeding.

In last season’s National League Playoffs, the Los Angeles Dodgers won the NL West and finished with the best overall record in the NL. In this new format, they would be the 1-seed.

The Atlanta Braves won the NL East and finished with the second-best NL record. They would be the 2-seed.

The St. Louis Cardinals won the NL Central and finished with the third-best record in the NL. They would be the 3-seed.

Now, bear with us.

It’s all coming together now.

On the Sunday night that the regular season ends, on live TV, representatives from each team will begin the selection process.

The Dodgers would have a bye and automatically land in the NLDS. The Braves – the 2-seed – would host a 3-game series against a bottom three team of their choosing: the Brewers, the Mets or the Diamondbacks. Essentially, the 5-, 6- or 7-seed.

For example’s sake, let’s say the Braves choose to play the Diamondbacks. Now, the Cardinals – the 3-seed – would host a 3-game series against one of the two bottom teams left: the Brewers or the Mets.

Let’s say the Cardinals choose the Mets. Now, the Nationals – the 4-seed – are left to host the last of the bottom three Wild Card squad. In this case, the Brewers.

We got through that together.

You can read the full report here:

https://t.co/RDTj5m8cBd EXCLUSIVE: MLB is planning a radical change to their postseason perhaps by 2022, hoping to move from 5 to 7 teams in each league and — get this — have the teams with the best records pick their playoff opponents.

More updates are sure to develop out of this story, so stay tuned!

We say thanks to John Johnson (VIDEO)

Hikers find remains near campsite with a bear lurking nearby