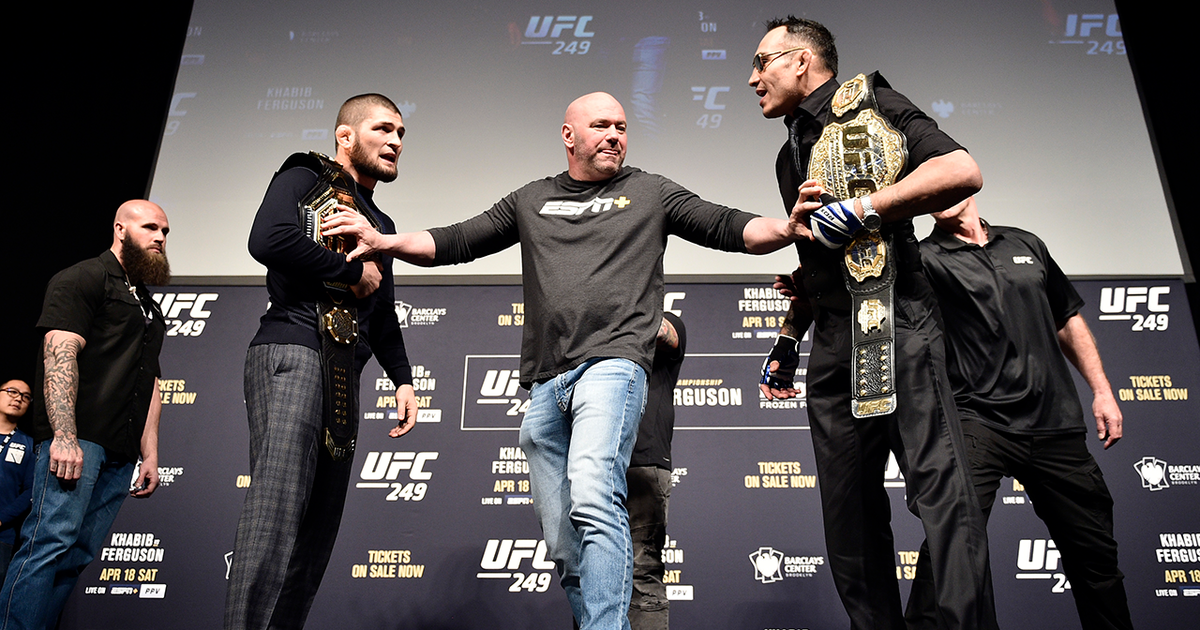 There are much bigger issues at hand than mixed martial arts, specifically the COVID-19 pandemic that is affecting millions of individuals and families across the globe.

Still, MMA fans can’t help but feel sad today, considering one of the most-anticipated fights in UFC history was supposed to take place tonight and was cancelled – for the fifth time.

Believe it or not, the biggest fight that the UFC can currently produce does not involve its biggest star, Conor McGregor.

It does, however, involve his biggest rival, lightweight champion Khabib Nurmagomedov.

McGregor and Khabib’s feud has become the stuff of infamy, following a nasty post-fight melee after their in-ring matchup at UFC 229 on October 6, 2018.

Still, for the hardcore MMA fan, despite the bad blood between the two, Khabib’s victory over McGregor was decisive and an immediate rematch is not in order.

Tony Ferguson is the only man that UFC fans want to see Khabib square-up with.

As you can see, Khabib and Ferguson have developed a little feud of their own – and part of it has to do with their long-standing history of not fighting each other.

Nurmagomedov (28-0) and Ferguson (25-3) are two of the most successful lightweight fighters in UFC history and currently sit atop the UFC’s lightweight rankings. On Saturday night, they were supposed to settle who is the best lightweight fighter in the world, but their title matchup was canceled due to the COVID-19 pandemic.

However, it’s not the first time that this fight has been flushed down the drain, as the two had been scheduled to fight four times prior to UFC 249.

A history of Khabib Nurmagomedov vs. Tony Ferguson being cancelled:

⚖️ 2017: Khabib has medical issues related to his weight cut

The first fight between the two was scheduled for Dec. 11, 2015, but Khabib pulled out due to a rib injury, one that he claimed would affect his career for years to come.

The fight was then rescheduled for April 16, 2016, but it was Ferguson that was unable to fight due to blood in his lungs.

Usually I can Power thru small Bumps & Bruises. Doc Said I have Fluid/Blood in my Lung #UFCTampa I Will Heal Up. I Will be Back.#TeamElCucuy

However, the day before the fight, Khabib pulled out once again, this time because of issues making weight.

@TeamKhabib I Hope U Feel Better Khabib, I Pray For Your Recovery, I Mean It, Get Better #Road2Gold #TonyFergusonMMA #UFC209 @ufc @danawhite

Would you believe it if we told you Ferguson tore his LCL tripping on a cable cord on April 1 – six days before the fight – and was forced to pull out?

At this point, of course you would.

That brings us to a few weeks ago, when the fifth Khabib-Tony fight – scheduled for UFC 249 tonight – was canceled due to the coronavirus outbreak, namely because Khabib was not able to fly out of his come country of Russia.

Of course, MMA fans were heartbroken and placed most of the blame on Khabib for traveling to Russia amid the pandemic and then not being able to leave the country.

Staying home in quarantine and reading the reaction of people to the situation around my fight, it turns out that the whole world should be in quarantine, governments of all countries, famous people around the world… https://t.co/ZLwFsdQSDQ

However, UFC president Dana White was quick to defend his lightweight champion.

“[Khabib] got caught up in Russia. It was a total mishap. We all made mistakes in that one. Nobody’s to blame for that.”@danawhite tells @bokamotoESPN about the difficulty of pulling #UFC249 together. pic.twitter.com/gga3JaRpqH

White tried to salvage the UFC 249 card, replacing Nurmagomedov with lightweight contender Justin Gaethje, but eventually, the entire card was canceled at the behest of ESPN, UFC’s partner.

Who knows when we’ll have fights again, but whenever we do, hopefully the first fight we see is between Khabib and Ferguson.