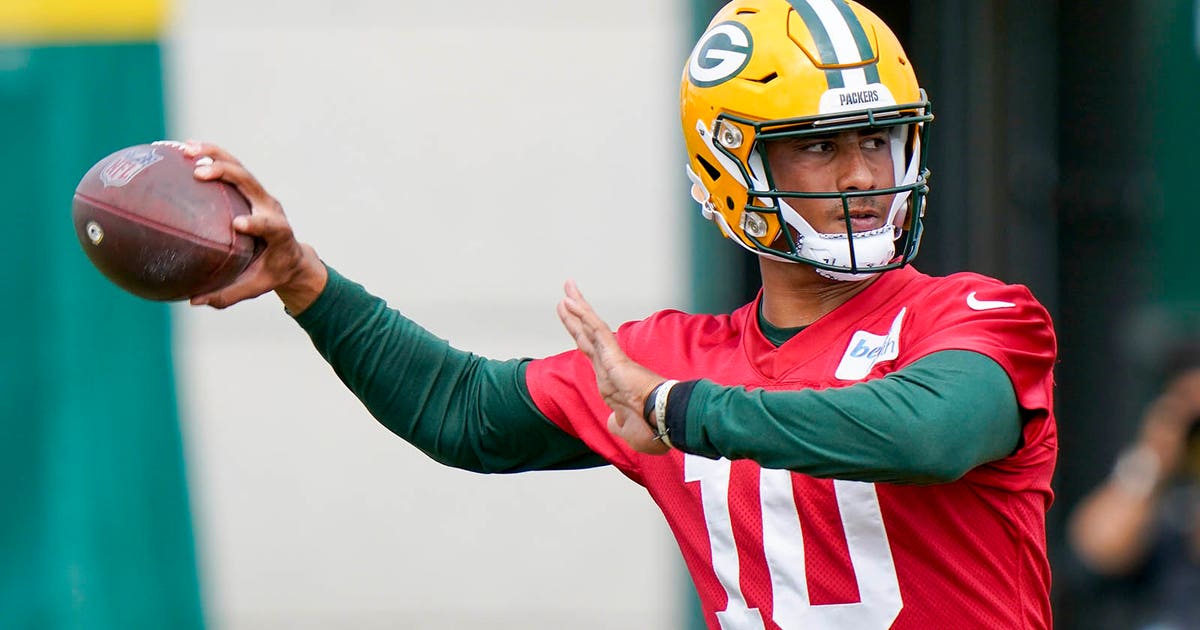 Green Bay Packers rookie Jordan Love says he has tried not to pay attention to all the media speculation surrounding the team’s long-term quarterback plans now that they’ve drafted him as Aaron Rodgers’ potential successor.

Love instead is trying to soak in as much as possible as the former Utah State quarterback watches Rodgers go about his business.

“It’s great for me just being able to sit there, be in the same room as him, and just hear how he thinks about plays and go out to practice and watch him put it together,” Love said. “It’s really awesome for me to see and take in and evaluate him and evaluate myself and just try to do my best job to learn by watching him.”

The Packers’ decision to trade up four spots in the first round to take Love with the 26th overall pick in the draft naturally led to questions about how many more seasons Rodgers might remain in Green Bay.

Rodgers, a two-time MVP with four years remaining on his contract, has acknowledged the move surprised him. The situation has drawn comparisons to Rodgers’ arrival at Green Bay and the awkward transition that took place when he replaced Brett Favre after backing him up for three seasons.

Love had nothing but positive things to say about Rodgers on Thursday.

“It’s been really good,” Love said. “He’s a great person and has been able to help me in the quarterback room on certain things.”

Rodgers has said he always has gotten along well with his backup quarterbacks and expects that to continue with Love. Rodgers has noted the shared background they have since both weren’t highly touted recruits coming out of high school.

Love was regarded as less polished than other top quarterback prospects in this draft after throwing 17 interceptions last season at Utah State. The Packers are betting on his upside, which was more apparent in 2018 when Love threw 32 touchdown passes and only six interceptions on a stronger Utah State team.

But the unusual nature of this season could impact Love’s learning curve.

The coronavirus pandemic prevented NFL teams from holding their traditional rookie minicamps and offseason training activities. That left Love without as much time to work with Packers coaches or his new teammates as he attempted to learn the offense through Zoom sessions.

“I’d take what I was learning in the meetings and I’d go out with my quarterback coach and go work out and try to implement footwork and route concepts and try to do little pieces of it,” Love said. “That was the way I started learning things. It’s obviously different being out there compared to being here and actually going through a full practice. That doesn’t really do it justice, but it’s all we could do at the time so we had to make it work.”

So it shouldn’t come as much of a surprise that Love still has plenty of work to do as his rookie season approaches. The Packers just opened training camp Saturday, yet their Sept. 13 season opener at Minnesota is only a few weeks away.

“He’s very natural and, you know, there’s a lot to clean up right now,” Packers coach Matt LaFleur said. “He’s a young quarterback that is learning a new system. And just how specific we are with the footwork, I think that takes time. But I’m pleased at how he attacks it on a daily basis. I think he’s a really intelligent kid and he’s very athletic, so I think it’s a matter of time before he can pick up mechanics.”

The Packers can afford to be patient since they already have Rodgers. Right now, Love is competing for the backup spot with Tim Boyle, a former undrafted free agent who played college football at Connecticut and Eastern Kentucky.

Boyle’s experience could give him an edge after he appeared in three games as Green Bay’s backup last year. Boyle acknowledges he got some additional incentive when the Packers drafted a quarterback in the first round.

“It’s not going to change my approach,” Boyle said. “I’m going to do what I can do to help the team and get myself ready to be the best player I can be and for the team. But drafting a quarterback in the first round, if anything, gave me some extra motivation this offseason to get my mind right, get my body right and come into training camp and attack it.”

Bernie Sanders: Donald Trump Would "Chew [Bloomberg] Up And Spit Him Out” In A...

Digital Extra: What’s the last thing the Brewers have Googled?