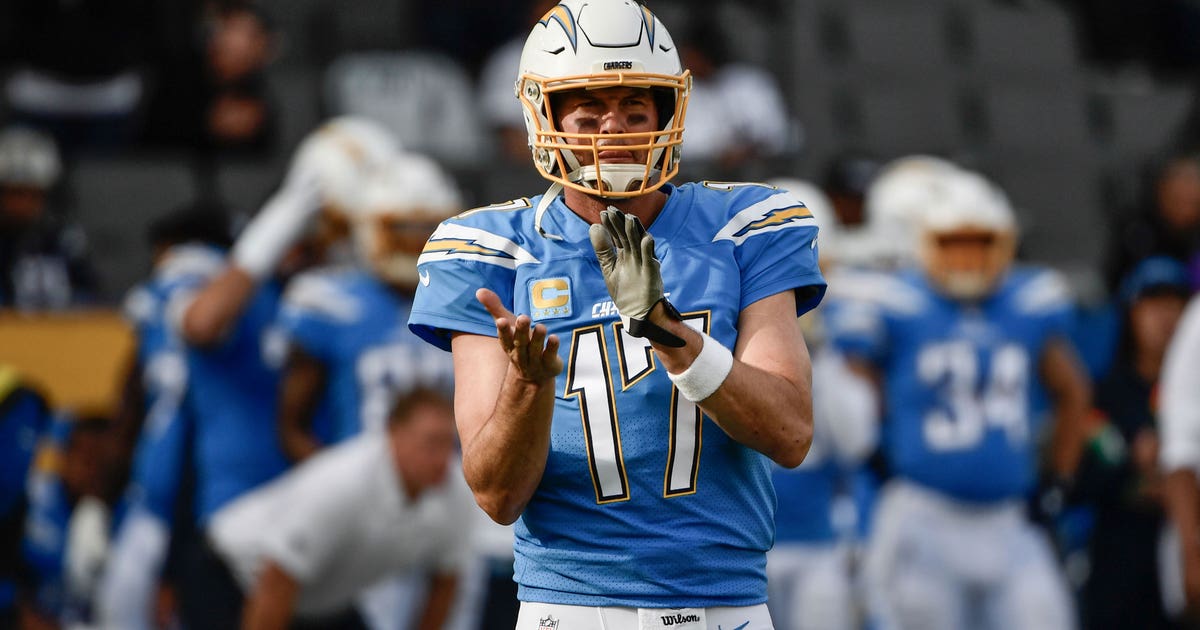 INDIANAPOLIS — All Philip Rivers really wanted was a chance to play one more NFL season.

So when the Indianapolis Colts gave him a shot, the eight-time Pro Bowler took it.

Rivers officially ended his 16-year tenure with the Chargers on Saturday by signing the $25 million deal he agreed to earlier this week.

“I still love to play. I know I can play at a high level,” the 38-year-old quarterback said on a conference call, acknowledging he was ready to walk away from football if he received no offers.

“It was one of those things where we said if there’s nothing out there, then that’s our answer. But if there’s an opportunity with a team … it ended up being with this organization and that made it that much more exciting,” he said.

Rivers feels he has plenty to offer even after one of his worst seasons.

He threw 23 touchdown passes, his lowest total since 2007, and 20 interceptions, matching the second-highest total of his career. While some blamed the troubles on a poor offensive line or Rivers trying to do too much to rally the Chargers late in games, others contended his skills were rapidly deteriorating.

Now, with a fresh start, a strong running game and one of the league’s top offensive lines, Rivers insists he will prove the critics wrong this season.

“I feel great, and if I feel like I do next year then I’ll be excited to keep on going, depending on how the team feels about it,” Rivers said. “I do want to coach my oldest son (in high school). I have two sons, they’re 12 and eight, so we’ve got a little time. I don’t think you’ll see me in the Tom Brady range, but I feel good and I feel like I can help a team win a championship.”

Rivers suspected he was headed into his first foray in free agency when he tearfully told reporters at season’s end he would not quit. In February, the Chargers made it official by announcing the two sides mutually agreed to part ways.

So Rivers, his wife and their nine children moved to the family home in northwest Florida and contemplated their options. Yes, he considered starting his long-desired coaching career even as speculation swirled about potential landing spots.

But Rivers decided he just wanted to keep playing.

And when free agency opened this week, Rivers was hopeful he could reunite with Frank Reich and Nick Sirianni, two of his former position coaches, in Indy. Reich is starting his third season as the Colts’ play-calling head coach, while Sirianni continues in his role as offensive coordinator.

“Philip is one of the most decorated quarterbacks in the NFL, and we are fortunate to add an experienced player of his caliber to our organization,” Colts general manager Chris Ballard said in a statement. “His familiarity with our coaching staff and offensive system, in addition to his experience, were attractive qualities during our evaluation process. Philip is a fierce competitor, and his veteran leadership will be crucial in the continued development of our young roster.”

They’re hoping Rivers leads them to the playoffs after the Colts stumbled to a 7-9 record last season.

First, he must beat out incumbent starter Jacoby Brissett, who struggled during the second half last season after injuring his left knee. Brissett, like Rivers, is a North Carolina State alum, but the two haven’t spoken yet this week, Rivers said.

In the meantime, with a challenging offseason looming, Rivers wants to keep the goals simple: Meeting his new teammates, learning the offense and being ready to go whenever football resumes.

“Building a friendship, building a relationship is huge and that’s really my favorite part of this game, just being a great teammate,” he said. “I love being a teammate, I want to be one of the guys and I want them to know that.”

Desir made 29 starts in three seasons with Indy and had 161 tackles, five interceptions, two forced fumbles and one fumble recovery. Indy claimed Desir off waivers from Seattle in 2017, and he was a fourth-round draft pick by Cleveland in 2014.

Hoyer made one start last season with the Colts after signing following his release from New England in the preseason. Indy will save another $5 million.

Colin Cowherd: Dak Prescott’s contract with Dallas is the story that won’t go away | THE HERD

AP PHOTOS: Venice has people in masks but no Carnival fun

Boxing Legend Activewear Collab – Champion Announces a Collaboration with the...