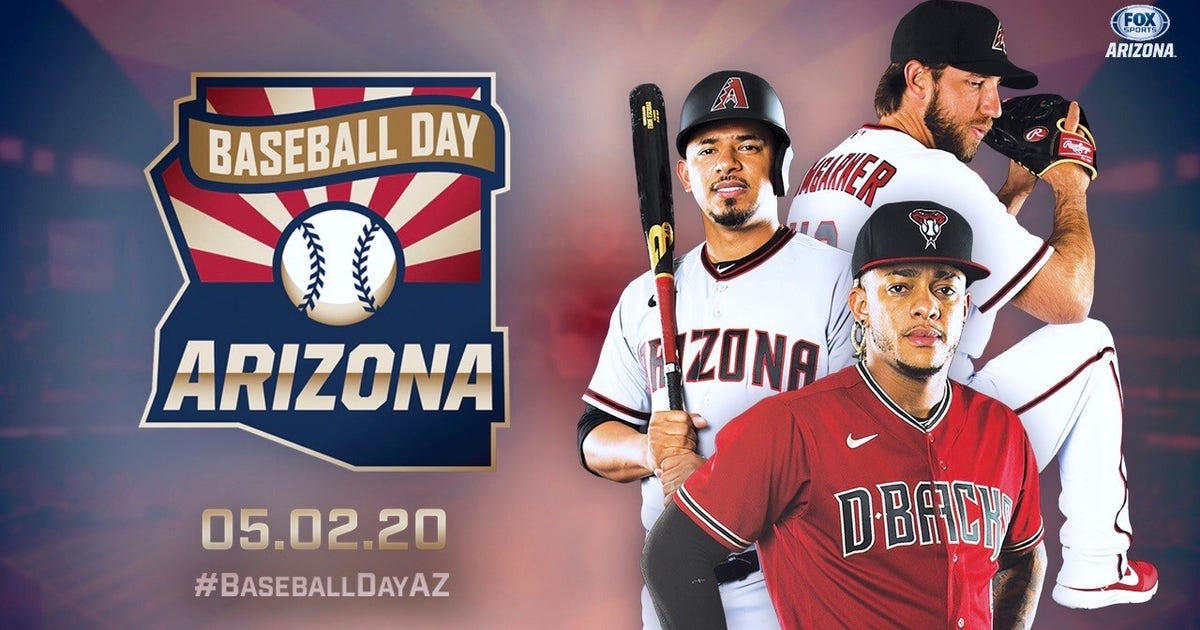 Not only is baseball America’s Pastime – it’s also Arizona’s Pastime. Today, FOX Sports Arizona, in partnership with the Arizona Diamondbacks and Arizona Interscholastic Association announced a sport that means so much to Arizonans will be celebrated when the second annual “Baseball Day Arizona, Presented by Verizon” is held on Saturday, May 2.

The day will include 24 consecutive hours of programming devoted to baseball in the Grand Canyon State on FOX Sports Arizona and FOX Sports Arizona Plus. Included in the lineup will be four different game broadcasts, including two AIA first-round state baseball playoff matchups plus a D-backs and Cubs game from Chase Field (English and Spanish broadcasts).

The day begins at 9 a.m. in Chase Field with the “Baseball Day Arizona Girls Play Ball Clinic.” Open to girls ages 9-12, it’s a free Arizona Diamondbacks outreach initiative that promotes empowering girls and young women to get involved in the sport of baseball. Girls can sign up to participate at www.dbacks.com/girlsplayball.

Television coverage begins at 9:30 am from FSAZ’s Baseball Day Arizona set at Chase Field with a 30-minute warm-up show. At 10 a.m., viewers will be taken to Hohokam Stadium in Mesa for the first of two AIA 6A state baseball playoff games. The first game is at 10 a.m. and the second contest is scheduled to start at 1:30 p.m. To add another exciting touch to these games, the four participating teams will be announced live on Thursday, April 30 during FOX Sports Arizona’s D-backs Live pregame show at 6 p.m. as part of the entire 6A state tournament bracket that will be revealed during the show.

Following the AIA’s 6A playoff telecasts, it’s back to Chase Field for an MLB battle as the D-backs host a team that has roots in Arizona dating back to 1952 – the Chicago Cubs. The D-backs Live pregame show starts at 4:30 p.m., followed by first pitch at 5:10 p.m. In addition to the FOX Sports Arizona broadcast, the game will also feature a Spanish broadcast airing at the same time on FOX Sports Arizona Plus.

In addition to the games, FOX Sports Arizona will offer studio programming from its set in Chase Field. It will feature numerous guests and introduce viewers to features done by FOX Sports Arizona’s original programming department that showcase compelling baseball stories from around the state of Arizona.

“Building off the success of the very first Baseball Day Arizona in 2019, this year’s event will mean even more with the addition of two high school playoff games plus a marquee match-up featuring the D-backs & Cubs,” said Brian Hogan, FOX Sports Arizona Sr. Vice President & General Manager. “I would like to thank the Arizona Diamondbacks and Arizona Interscholastic Association for their amazing cooperation and we can’t wait to celebrate what baseball means to Arizona on May 2.”

“In just its second year, Baseball Day Arizona is already becoming a staple on the calendar that fans across our state are excited to watch,” said D-backs President & CEO Derrick Hall. “It takes on an even greater significance when we have six players in big league camp who played high school or college baseball here and are key parts of our team. We’re looking forward to working with our partners at FOX Sports Arizona to continue to make this an annual tradition.”

“It’s really exciting for our schools to be a part of Baseball Day Arizona,” said AIA Executive Director David Hines. “They work so hard to get this point. And for the state of Arizona to see the culmination of their successful seasons means a lot for the kids and the programs. Baseball fans are in store for a great day with some top-notch contests.”

Fans, players and families are encouraged to take part in Baseball Day Arizona by posting photos or videos on Instagram, Twitter or Facebook and letting everyone know what baseball means to them with the official hashtag #BaseballDayAZ. FOX Sports Arizona and the D-backs will share the content on their social media platforms, some photos will appear on Chase Field’s DBTV during the D-backs & Cubs game and others will be chosen to make it to television during FOX Sports Arizona’s programming.

In addition to being able to watch it on FOX Sports Arizona and FOX Sports Arizona Plus, everything will also be streamed on the free FOX Sports GO app, making it easier for fans to keep up with what’s happening even when they are out watching their favorite team play in person that day. FOX Sports Arizona’s social media platforms will have the day covered on the digital side, complete with a Baseball Day Arizona wrap-up show hosted by digital personality Kristin MacDougald on YouTube after the D-backs & Cubs postgame show ends.

FOX Sports Arizona televises the most regional sports action in the state and is the exclusive cable television home of the Arizona Diamondbacks, Phoenix Suns, Arizona Coyotes, Arizona Cardinals, Phoenix Mercury, Arizona Interscholastic Association championship events and New Mexico State University. FOX Sports Arizona is currently seen in 2.5 million households in Arizona & New Mexico and can also be seen across the country via home satellite services. For even more coverage of the local sports scene, check out FSAZ’s social network platforms on Twitter, Facebook, Instagram and You Tube.

McConnell: Senators Will Show Up To Work Like The “Essential Workers We Are”