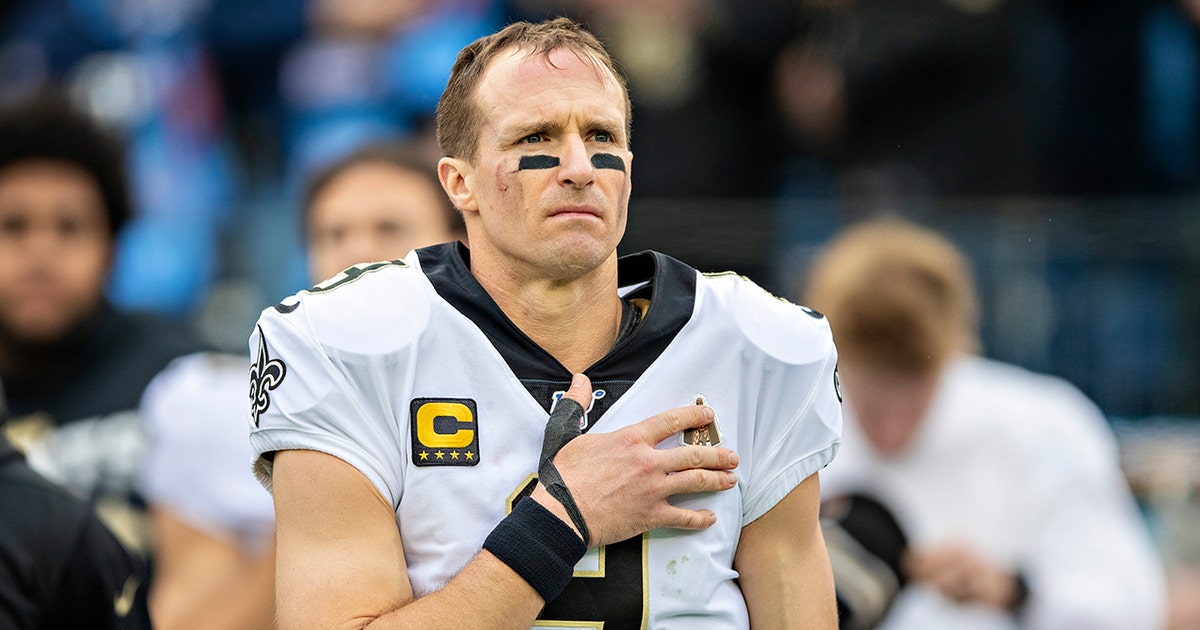 Legendary New Orleans Saints quarterback Drew Brees is facing backlash after comments he made in an interview with Yahoo Finance on Wednesday.

Highlight: @readdanwrite asks @drewbrees what the star NFL quarterback thinks about “players kneeling again when the NFL season starts.”@drewbrees: “I will never agree with anybody disrespecting the flag of the United States of America or our country.”

In response to the death of George Floyd on May 25, protests and demonstrations have engulfed the United States, as well as social media, where hundreds of professional athletes have made their voices heard regarding Floyd’s death and the treatment of the black community in America.

One of those athletes who was asked to comment on the situation was Brees, who participated in a video interview with Yahoo Finance on Wednesday. In the interview, Brees was asked how he believes the NFL should respond during the upcoming season if players choose to kneel during the national anthem, a method of peacefully protesting police brutality that was popularized by former San Francisco 49ers quarterback Colin Kaepernick in 2016.

“I will never agree with anybody disrespecting the flag of the United States of America or our country. Let me just tell you what I see or what I feel when the national anthem is played, and when I look at the flag of the United States: I envision my two grandfathers, who fought for this country during World War II – one in the Army and one in the Marine Corps, both risking their lives to protect our country and to try to make our country and this world a better place. So every time I stand with my hand over my heart, looking at that flag and singing the national anthem, that’s what I think about. And in many cases, it brings me to tears, thinking about all that has been sacrificed … Is everything right with our country right now? No, it’s not. We still have a long way to go. But I think what you do by standing there and showing respect to the flag with your hand over your heart, is it shows unity. It shows that we are all in this together. We can all do better and we are all part of the solution.”

Thomas posted a series of tweets after Brees’ statements came to light, many of which seemed to be directly aimed at his quarterback.

He don’t know no better.

We don’t care if you don’t agree and whoever else how about that.

Thomas wasn’t the only member of the Saints to speak out in response to Brees’ comments. Star running back Alvin Kamara appeared to respond early this afternoon:

And wide receiver Emmanuel Sanders seemingly had his say as well:

He’s beyond lost. Guarantee you there were black men fighting along side your grandfather but this doesn’t seem to be about that. That uncomfortable conversation you are trying to avoid by injecting military into a conversation about brutality and equality is part of the problem https://t.co/ON81UsOWPw pic.twitter.com/HH3EVTIH8p

.@drewbrees the reason my children have to live in a world that won’t empathize with their pain is because people like you are raising your children to perpetuate the cycle. Drew, you are the problem.

Here are a few other responses from fellow NFL players:

This is a disgrace! To speak about your grandfathers as if there weren’t black men fighting next to them.Those men later returned to a country that hated them. Don’t avoid the issue and try to make it about a flag or the military. Fight like your grandfathers for whats right! https://t.co/qag3Igic3V

Damn drew hurt me with that one🤦🏾‍♂️!!

men who fought as well for this country. I asked him question about it and thank him all the time for his commitement. He never found Kap peaceful protest offensive because he and I both know what’s right is right and what’s wrong is wrong! God bless you. 🙏🏾✊🏾👑

Brees has since sought to clarify his comments, and spoke with ESPN’s Mike Triplett regarding the backlash.

“I love and respect my teammates, and I stand right there with them in regards to fighting for racial equality and justice,” Brees said. “I also stand with my grandfathers who risked their lives for this country and countless other military men and women who do it on a daily basis.”

Here’s the full news story on Drew Brees reiterating his stance on anthem protests and responding to the backlash over his comments https://t.co/sE63QSXcE2

“And I would ask anyone who has a problem with what I said to look at the way I live my life. Do I come across as someone who is not doing my absolute best to make this world a better place, to bring justice and equality to others, and hope & opportunity to those who don’t have it? That’s what I meant by actions speak louder than words. … My ACTIONS speak for themselves.”

Saints coach Sean Payton is yet to address Brees’ comments, but ESPN’s Dianni Russini said that the Saints players she spoke with will aim to handle the matter “in-house.”

I reached out to some Saints players about QB Drew Brees’ comments, many don’t want to give quotes to the media at this time. I’m told there is a plan for a team meeting to discuss this “in-house”

One Saints player who spoke out on Brees’ behalf was defensive end Marcus Davenport.

I can see points in what my teammate was saying HIS connection to disrespecting the flag, I agree he should’ve said something on the current police brutality or the current injustices within our system but He spoke his connection to his patriotism.