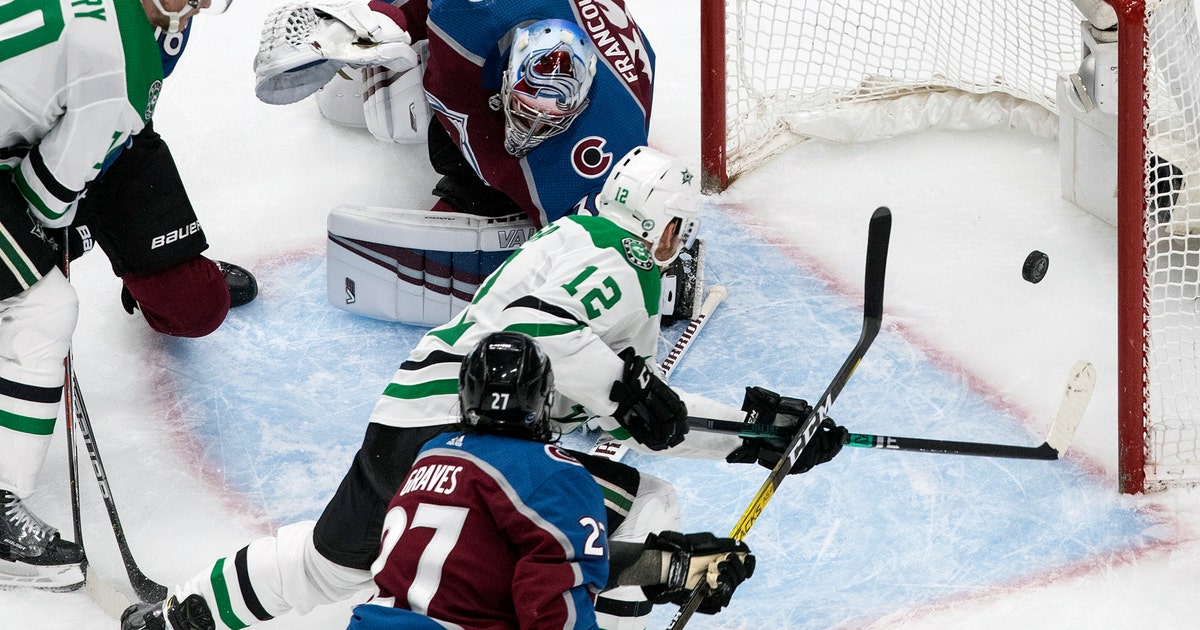 EDMONTON, Alberta (AP) — Alexander Radulov scored on a deflection off his chest as part of a four-goal second period and the Dallas Stars beat the Colorado Avalanche 5-2 on Monday night to take a 2-0 lead in the second-round series.

Trailing 2-0 in the second period, Joe Pavelski and Radek Faksa revitalized the Stars by scoring in a 43-second span during a 5-on-3 advantage.

Dallas was just getting started. Radulov knocked in the go-ahead goal when a shot bounced off a stick, into his chest and over Colorado goaltender Pavel Francouz. Esa Lindell then added another with 46 seconds remaining to make it 4-2.

The Avalanche pulled Francouz with around two minutes left in the game, but couldn’t score. Jamie Oleksiak added an empty-netter with 10 seconds left.

Anton Khudobin stopped 39 shots as the Stars won their fifth straight game. He came up big in the first by only allowing a goal from Nathan MacKinnon, despite Colorado out-shooting Dallas, 20-6.

MacKinnon also had an assist on Mikko Rantanen‘s second-period goal. MacKinnon has a point in all 10 postseason games for Colorado, tying Joe Sakic (1996) and Marian Stastny (1982) for the franchise’s longest points streak to begin a postseason.

Francouz made 22 saves in taking over for an injured Philipp Grubauer, who along with defenseman Erik Johnson remains out indefinitely.

The 30-year-old Francouz looked sharp until the second-period meltdown.

That’s when a listless Stars team was ignited by a two-man advantage. Pavelski scored on a nifty cross-ice pass from Radulov. Then, Faksa knocked in another to tie the game.

Soon after, Colorado went on a 5-on-3 advantage, but the team couldn’t capitalize.

It was another big momentum swing.

Dallas went ahead on a wild play down low. Jamie Benn sent in a shot near the goal that glanced off the stick of Colorado defenseman Samuel Girard, bounced off Radulov and into the net. Radulov also had two goals during the Stars’ 5-3 win in Game 1.

Just when it appeared the Avalanche might go into the intermission down a goal, they turned the puck over and it led to a score by Lindell. The officials took a look to make sure the puck wasn’t frozen by Francouz before it went in. The call on the ice was confirmed.

MacKinnon scored a power play goal in the first period and Rantanen added another power-play goal in the second. MacKinnon has seven goals and 11 assists to lead the NHL playoffs in points.

Following the series opener, Avalanche coach Jared Bednar called out the forwards not on the top line — MacKinnon, Rantanen and captain Gabriel Landeskog — for their intensity level. He wanted more or promised changes.

Changes could be in order for Game 3 on Wednesday.

Colorado will be without Grubauer indefinitely after he was hurt three minutes into the second period of Game 1 and needed assistance to get off the ice. Johnson later left following a collision with Dallas forward Blake Comeau.

Kevin Connauton replaced Johnson on the blue line. Connauton’s only playoff experience was in 2014 while with Dallas.

NOTES: Stars D Miro Heiskanen picked up his 11th assist of the playoffs. … G Ben Bishop and D Stephen Johns remain “unfit to play,” Stars coach Rick Bowness said. … Colorado F Matt Calvert was ruled out with an injury. Bednar remains hopeful he will soon be available. … Rantanen and Landeskog had assists on MacKinnon’s goal. … Colorado was 2 of 8 on the power play.

Multi-Functional Vegan Cosmetics – This KVD Beauty Product Can Be Used in Three Ways...