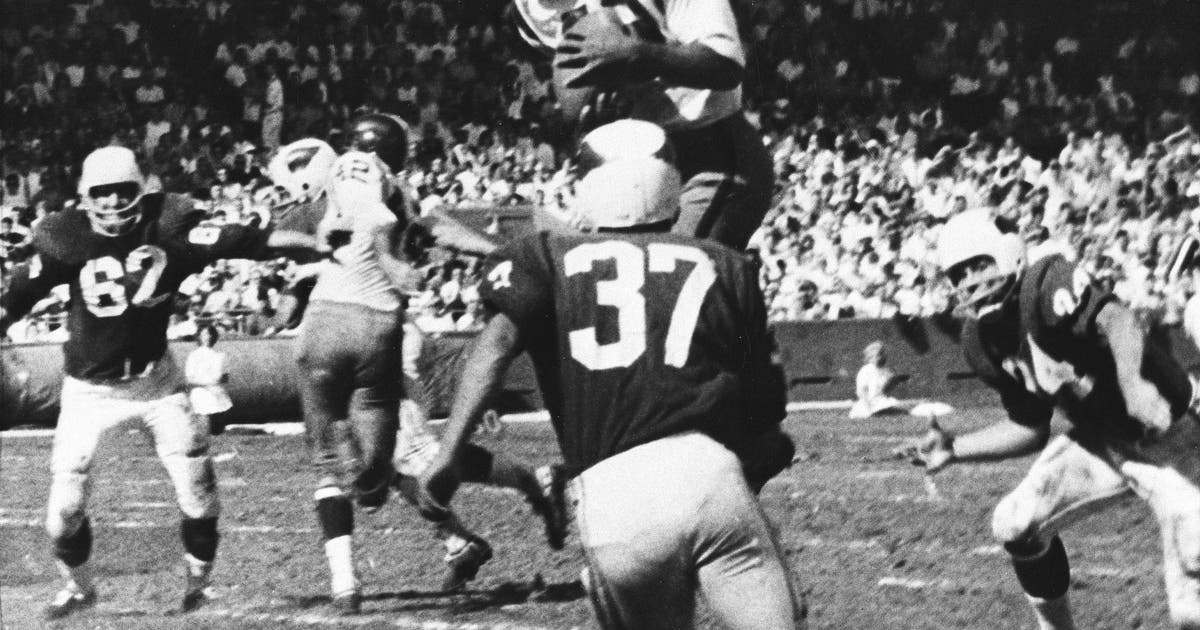 WASHINGTON (AP) — Bobby Mitchell, the speedy Hall of Famer who became the Washington Redskins’ first black player, has died. He was 84.

Mitchell split his career with the Cleveland Browns and Redskins and was inducted into the Pro Football Hall of Fame in 1983. The Hall of Fame said Sunday night that Mitchell’s family said he died in the afternoon but didn’t provide any other details.

When Mitchell joined the Redskins in 1962, they became the last NFL team to integrate. After playing his first four seasons in Cleveland, he spent seven more with Washington and retired with the second-most combined offensive yards.

Mitchell became a scout for the Redskins and later served as assistant general manager.

Mitchell played halfback for the Browns from 1958-61 and moved to flanker with the Redskins, leading the NFL in receiving yards in 1962 and 1963. He was a three-time All-NFL selection, played in four Pro Bowls and his 7,954 all-purpose yards were the second-most in league history when he retired in 1968.

Mitchell grew up in Hot Springs, Arkansas, also played baseball in high school and starred in track and football at the University of Illinois. The Hall of Fame flag on the museum’s campus in Canton, Ohio, will be flown at half-staff in Mitchell’s memory.

NEW ORLEANS (AP) — Tom Dempsey, the kicker born without toes on his kicking foot who made a then-record 63-yard field goal, died late Saturday while struggling with complications from the new coronavirus. He was 73.

Ashley Dempsey said Sunday that her father, who was in an assisted living home for several years after being diagnosed with dementia, tested positive for the coronavirus a little more than a week ago. The Orleans Parish coroner has yet to release an official cause of death.

Dempsey’s winning field goal for the New Orleans Saints against Detroit on Nov. 8, 1970, stood as an NFL record for 43 years until the Broncos’ Matt Prater broke it with a 64-yarder in Denver in 2013.

Dempsey spent 11 seasons in the NFL. His first two seasons were with New Orleans (1969-70), the next four with Philadelphia, then two with the Los Angeles Rams, one with the Houston Oilers and the final two with Buffalo. He retired after the 1979 season.

Dempsey was born in Milwaukee without four fingers on his right hand and without toes on his right foot. He kicked straight on with a flat-front shoe.

The 6-foot-3 Hagans was the Southeastern Conference Defensive Player of the Year as a freshman and became one of the country’s best point guards this past season, averaging 11.5 points, 6.4 assists, 3.9 rebounds and 1.9 steals l

However, his time at Kentucky ended in controversy when he argued with forward Nick Richards and coach John Calipari and reportedly refused to re-enter in the second half of a home loss to Tennessee. Hagans then requested time away from the team for personal reasons and did not travel to the season finale at Florida.

Athletic director Chris Del Conte announced the move by tweeting a picture of himself with Schaefer and his family holding up the “Hook’em Horns” hand signal. Del Conte didn’t immediately return a message seeking comment.

MADRID (AP) — Players criticized the Spanish soccer league’s decision to ask clubs to put them on government furloughs during the coronavirus pandemic.

On Friday, the league said the furloughs were needed because there was no agreement on the size of the salary cuts that players must take to reduce the financial impact.

“It is strange that the Liga supports (the furloughs),” the players’ association said in a statement.

It said the league should have created a financial cushion for this period considering it had always boasted about its “economic control measures” and the “well-balanced economy” of the Spanish clubs. The association also said it should be taken into account that the league has been temporarily suspended and not yet canceled.

The league and players have been in talks to try to find ways to mitigate losses that could reach nearly 1 billion euros ($1.08 billion) if the season cannot be restarted

The 29-year-old Walker apologized after it was widely reported he held a party involving two sex workers at his home last week, breaking the government’s rules on social distancing. The country is in the middle of a three-week lockdown.

The 29-year-old striker who plays for Saudi Arabian club Al-Ittihad pleaded guilty at a video link trial in Belgrade on Saturday. Police arrested Prijovic and 19 others for gathering at a hotel lobby bar in Belgrade on Friday in violation of the country’s 5 p.m. to 5 a.m. lockdown.

CHARLOTTE, N.C. (AP) — William Byron won the iRacing event at virtual Bristol Motor Speedway, where NASCAR would have been really racing before the coronavirus pandemic caused sports to shut down.

NASCAR changed the format this week and started with single-car qualifying to set the field for a pair of 50-lap heat races. Those heat races determined the starting order. Byron started from the pole and was never challenged.

The entertainment again came from the drivers, most of whom streamed their gaming experiences for fans to eavesdrop on the action and the arguing. Clint Bowyer was the in-race reporter and again delivered a hilarious performance.

Maxine Waters Denounces Black Men Voting for Trump: “I Will Never Ever Forgive Them,”...

John Brennan: “I’m Increasingly Embarrassed To Be A White Male These...