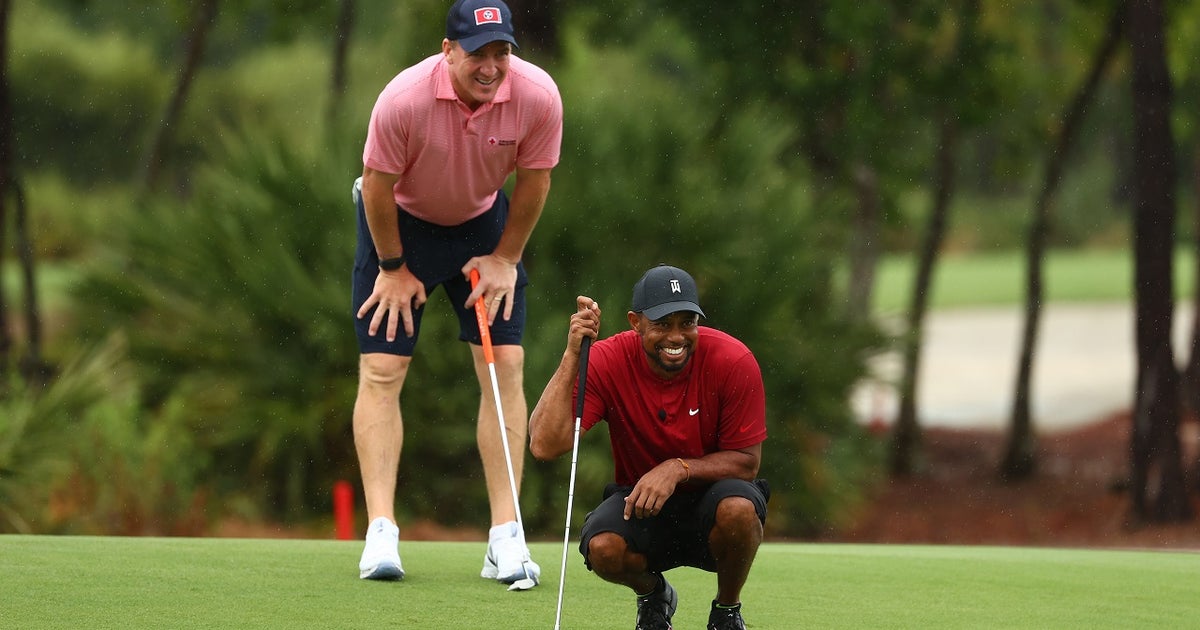 Could it have ended any other way?

On Sunday, Tiger Woods and Peyton Manning teamed up to take on Phil Mickelson and Tom Brady in “The Match: Champions for Charity,” and this highly entertaining golf event came down to the final hole — thanks in part to a Brady-inspired comeback.

All in a day’s work.

The Match featured a ton of rain, a healthy helping of trash talk, and $20 million raised for charity — and Brady delivered the first major highlight of The Match, absolutely dunking a shot from the fairway on the front nine after verbally sparring with Charles Barkley, who was on commentary:

Of course, since no good deed can go unpunished, Brady immediately thereafter split his pants. Fortunately, given the downpour at the start of the event (and which came back for the final few holes), he had a pair of rain pants to save the day.

Hey @TomBrady, we know a guy who knows how you feel. #TheMatch pic.twitter.com/YniOkwCpcH

Still, it was Tiger and Peyton who roared out to an early lead, looking as if they’d win this one in a walk over, as Brady struggled — and Tiger let him hear about it:

“That’ll be in the fairway…on seven”

That was on the front nine, though, which was played in a best-ball format. The back nine was alternate shot, which somehow strangely played into Brady and Mickelson’s favor, despite Brady’s early struggles. In fact, when Mickelson blasted a tee shot on the par-4 11th, Brady finished the hole with the eagle:

But in the end, Manning and Woods held off the competition to claim the victory. That makes Tiger and Phil tied at 1-1 in “The Match,” as Mickelson previously beat his rival on the 22nd hole in a pay-per-view event held in November of 2018.

Congrats to @TigerWoods and Peyton for a hard fought victory and thanks to @PhilMickelson for coaching your boy and keeping us in it.

Now…back to my day job 😉

As fun as the golf was, and as thrilled as we were to have competitive sports in our lives, even with just bragging rights and charitable donations on the line, what really made “The Match” special was the access. All four participants were mic’d up. They had communication to the broadcasters, and to guests who called in to poke a little fun. And so from the very beginning, we got to hear the trash talk, which our Martin Rogers wrote before the event would be a key component:

The access didn’t stop at the verbal barbs, though. Mickelson was a walking golf lesson who never stopped talking about the actual game.

He broke down all of his decisions and coached Brady on nearly every shot, adding an incredible layer of depth to the broadcast.

He also got very, very hyped about that aforementioned driving of the 11th green:

Phil was hyped after launching a bomb 💣

And he wasn’t the only one thrilled with how things played out on Sunday, as fans, fellow professional athletes, and celebrities shared their appreciation for “The Match” — including Eli Manning, who finally joined social media just for the occasion:

Great people, great banter, great(ish) golf … and amazing efforts for charity. What a huge success. So, can we do this again next weekend?

That was fun, thanks for the entertainment @TomBrady @TigerWoods @PhilMickelson & Peyton.

And also to the crew and staff working through that weather. Good times and some much needed live competition for us all.

And all for a great cause. #TheMatch

This is surpassed my expectations. Trash talk. Golf tips from @PhilMickelson A little competition. Some laughs. Production crew also done a nice job despite less than ideal conditions.

.@TigerWoods didn’t miss a shot all day, incredible. What a wonderful show. #TheMatch

How about @TigerWoods and Michael Jordan against @PhilMickelson and Steph Curry?

Congrats to @TigerWoods and Peyton Manning on the victory and an even bigger congrats to everyone involved. Such a fun event that raised a ton of money for a very important cause. #ThankYou #TheMatch