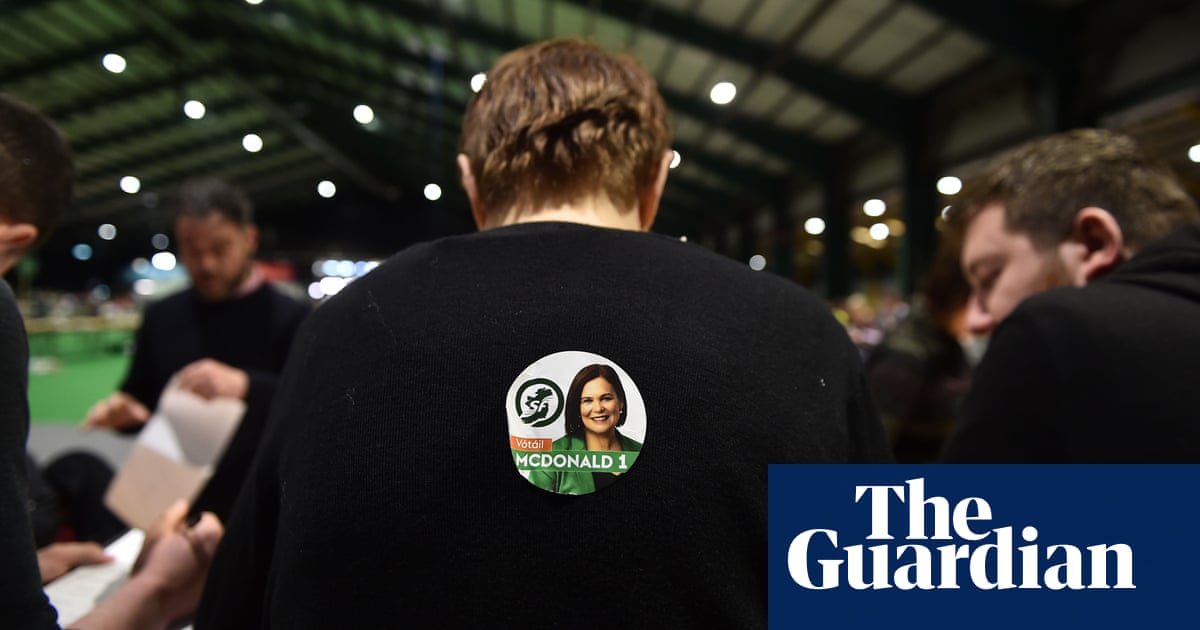 Sinn Féin’s breakthrough in Ireland’s general election was decades in the making, but not even Sinn Féin saw it coming.

Once a revolutionary party associated with guns and balaclavas, a toxic brand, it slowly edged from the fringe into the mainstream, inch by inch, and then on Saturday made a giant leap.

An exit poll gave Sinn Féin 22.3% of the vote, a statistical dead heat with Fine Gael on 22.4% and Fianna Fáil on 22.2%, two centrist rivals that have dominated Ireland for a century.

Full results are expected on Monday or Tuesday, but early tallies from count centres across Ireland on Sunday suggested the republican party had indeed made unprecedented gains and realigned Irish politics.

It did so in large part by appealing to voters who felt left behind by a booming economy and chafed at soaring rents, homelessness, insurance costs and hospital waiting lists.

Many were young and wanted to shake things up, to deliver a black eye not just to Leo Varadkar’s ruling Fine Gael party but to the main opposition party, Fianna Fáil, which they deemed too crusty and complicit in the system they sought to change.

The great paradox is that unification with Northern Ireland, the cause that birthed Sinn Féin in its modern form and still defines it, barely featured in the campaign. Britain, Brexit, Boris Johnson were not even blips on the radar. For many in Dublin, Cork, Limerick and other towns, the troubles are about paying rent, not murky historical events north of the border.

It would be easy to depict this as the inevitable destination of a long march led by a savvy, mercurial guide, Gerry Adams. In 1986 he recognised that the IRA would not be able to bomb its way to a united Ireland and persuaded the republican movement to abandon its policy of abstention and to compete for – and take – seats in the Irish parliament, Dáil Éireann.

Few inside or outside Sinn Féin foresaw its breakthrough this week. Last year, after all, the party suffered big losses in European and council elections. Mary Lou McDonald, a Dubliner, had replaced Adams but struggled to enthuse the republican base and attract new voters.

With support slumping, the party fielded just 42 candidates for the 160-seat Dáil, a strategy to minimise losses. Then the campaign started and its popularity rose – and rose.

Varadkar tried to make the election about the humming economy and his record on Brexit but voters were fatigued with Fine Gael, in office since 2011, and jaded with Fianna Fáil, which had backed Varadkar in a confidence-and-supply deal.

The shock of the crash, when Ireland meekly accepted its austerity medicine, had ebbed, exposing anger at the cost of living and patchy public services. Young people who got a taste for voting in the marriage equality and abortion referendums were ready for something new.

Instead of a tide for the Greens – who appear to have done well, but not spectacularly – it turned into a wave for McDonald and colleagues such as Pearse Doherty and Eoin Ó Broin who articulated leftwing solutions to Ireland’s problems.

Fielding so few candidates, however, may cap the number of seats to around 30 – well below Fianna Fáil and Fine Gael – making Sinn Féin a contender to join but not lead a coalition. Both parties have ruled out entering into government with Sinn Féin but Dáil arithmetic may force U-turns or an FF/FG alliance, or a fresh election.

McConnell: Congress Deserves No Special Praise, But COVID Relief Appears To Be On The...