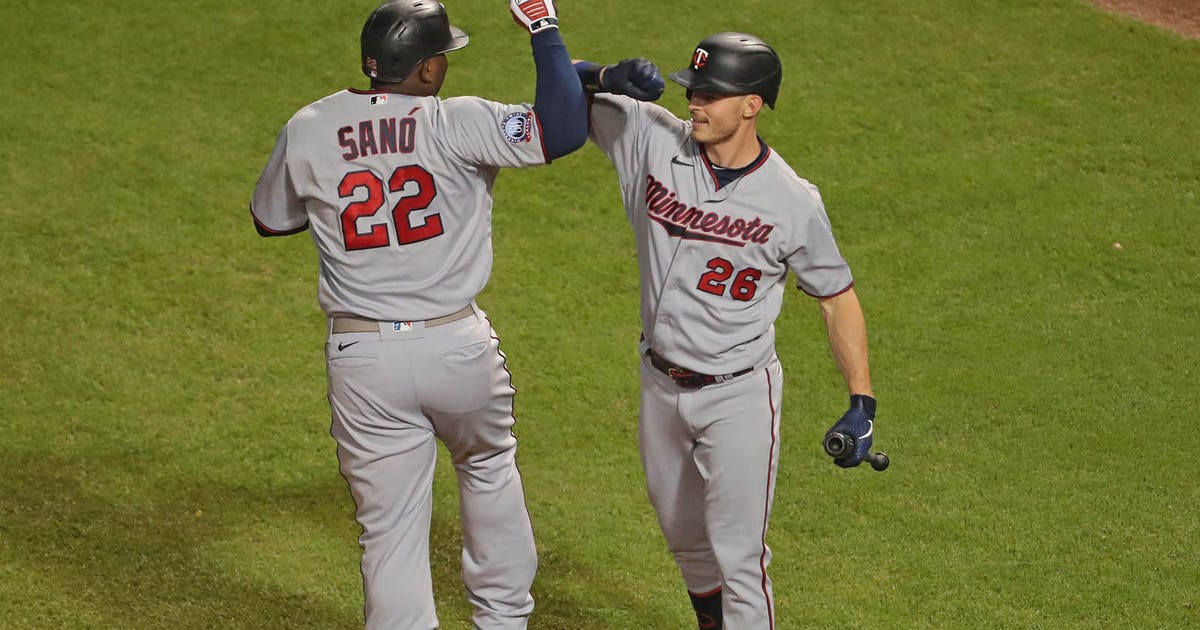 CHICAGO — Eddie Rosario, Miguel Sanó and Josh Donaldson homered as the Minnesota Twins clinched a second straight postseason berth with an 8-1 victory over the Chicago Cubs on Saturday night.

The Twins are guaranteed at least a wild-card berth. They trail the Chicago White Sox by three games in the AL Central with six games to play. The White Sox have eight games remaining.

“It’s special in there,” Twins manager Rocco Baldelli said. “You only get so many opportunities to earn something like that, to celebrate it. We’re going to celebrate every time we have the opportunity. The guys are ready. They’re just ready to see what comes next.

“We’re going to take tonight and have some fun, and get ready to go going forward.”

Coming off a no-hitter on Sunday against Milwaukee, Cubs starter Alec Mills (5-4) wasn’t nearly as sharp in this one, allowing four runs and six hits in six-plus innings. He struck out seven and walked one as Chicago’s five-game winning streak ended.

“Baseball’s funny; I actually think my stuff today was better than it was last time,” Mills said. “I know that may sound crazy. I made a couple of mistakes and the Twins took advantage.”

Rosario and Mitch Garver had a two-run pinch-hit single as Minnesota rebounded after dropping four of five on the current road trip against both Chicago teams.

The Twins, who won the division last year, will make back-to-back playoff appearances for the first time since 2009-10.

After Mills struck out the first two batters of the game, Rosario homered on the first pitch he saw for a 1-0 lead. The Cubs tied it in the second on a RBI double by David Bote.

In the sixth, Rosario hit an RBI single for a 2-1 lead.

The Twins broke it open with a five-run seventh. Sanó’s leadoff homer — over the left-field bleachers and onto Waveland Avenue — made it 3-1. Max Kepler followed with a double to left to chase Mills.

Jorge Polanco had an infield single against reliever Josh Osich, who then hit Marwin Gonzalez to load the bases. Donaldson, pinch hitting for Ehire Adrianza, hit a grounder to shortstop that Javier Báez bobbled. Báez picked the ball up and fired home, but the throw bounced and couldn’t be handled by catcher Willson Contreras as Kepler scored.

Garver, batting for Ryan Jeffers, followed with a two-run single to make it 6-1, and Byron Buxton capped the rally with an RBI single.

Donaldson added a solo shot in the ninth.

Speaking with the media for the first time since being ejected after hitting a homer in Thursday’s 4-3 loss at the White Sox, Donaldson said he didn’t regret his actions. “I felt great about it,” he said in a Zoom call with reporters before the game.

Donaldson said his issue with umpire Dan Bellino wasn’t just ball and strike calls, but that Bellino didn’t respond when asked where a pitch was.

“At the end of the day, there’s no accountability,” Donaldson said. “For the most part, they don’t care. They want to get the game over with. The players are the only ones that can hold these guys accountable.”

Twins: DH Nelson Cruz was scratched from the lineup less than an hour before first pitch with a sore knee … 2B Luis Arraez (left knee tendinitis) will play seven innings of a game at the team’s alternate site at St. Paul each of the next two days. He’ll be evaluated after that to see how his knee responds.

Cubs: RHP Rowan Wick (left oblique strain) was placed on the 10-day Injured List and may be out for the rest of the season, according to manager David Ross. Wick was 0-1 with a 3.12 ERA and four saves in 19 games. The 27-year-old has 20 strikeouts in 17 1/3 innings … LHP Andrew Chafin (left finger sprain) was activated from the IL. He was acquired from Arizona on Aug. 31.

Cubs right-hander Yu Darvish (7-2, 1.86) starts the finale of the three-game series Sunday night looking to become the first 8-game winner in the NL. Righty José Berrios (4-3, 4.15) goes for the Twins.

Sustainable 80s-Style Activewear – The PANGAIA Gym Collection is Made from Bio-Engineered Materials (TrendHunter.com)

Sanders: Anyone Making Attacks In My Name Is Not Part Of Our Movement, Internet...