How to describe Ryan Newman? Think of him as a mix of cheetah and bulldog — Newman’s popularity and longevity in the sport stem from his no-nonsense approach to racing. And because he is damn fast.

Known as The Rocketman for his uncanny ability to win poles early in his career, Newman captured an astounding 34 poles in his first four full-time seasons at Team Penske. In 2002, he won a season-high six poles, breaking the rookie record set by Hall of Famer Davey Allison. That year, he also joined Dale Earnhardt Jr. as the second rookie ever to win the All-Star race and beat out Jimmie Johnson for Rookie of the Year. 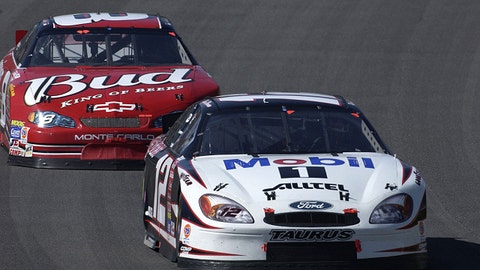 CONCORD, NC – 2002: Ryan Newman #12 became the second rookie to win The Winston All Star race, as he would hold off a hard-charging Dale Earnhardt, Jr #8 at the Lowes Motor Speedway in Concord, North Carolina.
ISC Archives/CQ-Roll Call Group/RacingOne

He followed that up by winning eight Cup series races in 2003. But seven races where he failed to finish, including five where he crashed, relegated him to sixth in the standings. That’s right, Newman was either winning races, or he was crashing out trying.

So why did Tony Stewart want him when he helped form Stewart-Haas Racing in 2009? And why did Richard Childress want him in 2014? And Jack Roush in 2019?

“You forget about racing… all you care about is him and his family. That’s all that matters. The racing is secondary from there.” Larry McReynolds and Jamie McMurray react to the latest news on Ryan Newman. pic.twitter.com/h9aADz8cjZ

Easy. The dude races hard. He is known as the driver toughest to get past during the normal course of the race. While others might not put up such a fight in order to have a favor down the road, Ryan Newman considers it a badge of honor, since that is what he gets paid to do.

That’s Newman, often thinking a little bit differently than the rest. And you there’s no argument that he doesn’t have the resume to back it up. A rarity in the Cup garage, Newman is a college graduate, having earned a vehicle structure engineering degree from Purdue in 2001. He attended school on the weekdays, and he won the sprint-car Silver Crown title in 1999 all while going to school.

That degree could make the 42-year-old Newman the smartest guy in the room, and he loves to battle with wit. Oh, yeah, the driver known as “Rocketman” questions the moon landing. He’s not sure there is enough proof of it. Is he for real? Only he knows. But he has said it many times. Publicly. And while people might roll their eyes, the fact he has the confidence to debate it — and isn’t sheepish about it — is another sign that he has strong, bulldog will.

His passions include the outdoors, and that led him and Krissie Newman to start a ranch where rescue animals are treated and Ryan, when he’s not racing, is likely out working somewhere on the grounds. Many in the NASCAR industry have contributed to the ranch, which includes the Earnhardt Family Playground that is specifically designed to accommodate special needs children, so none are left out during school programs at the facility.

That is why his injuries suffered Monday night in a serious accident made the NASCAR family cry. His two daughters were at Daytona for the race, hoping their daddy could get to victory lane. While the couple is separated, Krissie Newman tweeted prior to the finish that she “would love to see my girls in [Victory Lane] but always praying for a safe race”.

Many of the prayers tweeted from people throughout the NASCAR industry included the faith that Newman’s strong will would lead to a full recovery. As news that he did not have life-threatening injuries became public, fans of his at the hospital cheered and yelled “Rocketman.” As they yelled it, it seemed like they had confidence that the Ryan Newman they have watched for two decades, will do everything he possibly can, as fast as he possibly can, in the biggest challenge of his life.

Retiring GOP Sen. Roy Blunt: “I Don’t Think Anyone Has A Good Record” On...

Demand up for riverboat tours along private border wall