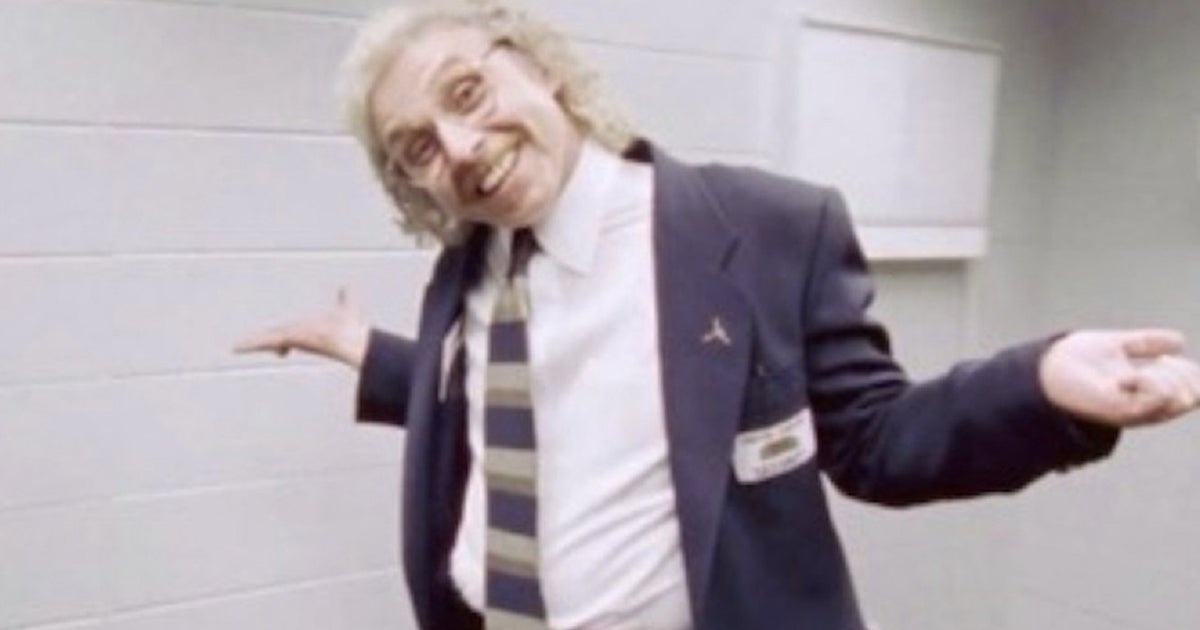 I can’t stop thinking about the scene in “The Last Dance” where John Michael Wozniak, Michael Jordan’s security guard from the 1990’s, plays a game of quarters against Michael Jordan.

Wozniak initially snagged the nation’s attention in Episode 6 because of his blindingly white, extremely curly hair. He looked like he was a Founding Father moonlighting in a metal hair band from the 80s and also happened to work at Chicago’s United Center. His curls were glorious, arresting — the kind of hair that makes you stop and wonder for a moment if you, too, should get a perm.

This hair-god kept America’s attention, however, because he beat Jordan at a game that involved throwing quarters at a wall near the Bulls’ locker room. The game progresses normally, with each man taking turns, and then goes off the rails when Wozniak beats Jordan. He beats Jordan! And not only did Wozniak win, he won with flair. After he took Jordan’s money, Wozniak hit Jordan with his own iconic shrug celebration.

When my dad says someone he works with follows me on Twitter pic.twitter.com/NWnRoXg8Of

That scene was internet gold: surprising, delightful, ridiculous. I’m writing about it now, days after I watched, because I can’t get it out of my head. Every time someone asks me a question (mostly over Zoom, but whatever) and I don’t know the answer, I hit them with what I’m calling The Wozniak Shrug.

What was it about that moment? Why did that minute-long, inconsequential game make such an impact?

For a few reasons. This was the first time we saw someone hold his own against Jordan. Not just in terms of winning the game, but in being cheeky and mischievous with him. Even Jordan’s teammates in the 90s footage seem to walk on eggshells around him. But Wozniak had no fear — he treated Jordan like a friend. The kind of friend you can roast mercilessly while trusting that they’ll love you anyway.

Wozniak was also in a scene a few episodes ago, and there was clearly a story to him. Guys with swagger like that don’t just pop up out of nowhere. Jordan must have seen someone confident enough to rock that hair and thought, “real recognize real.”

“I would watch a 10-part doc on just this man.” – @thewilderthings

That is, it turns out, exactly what happened. Wozniak wasn’t just a random guy who worked at the arena — he was Michael Jordan’s personal bodyguard. And sadly, according to The Athletic’s Matt Fortuna, who spoke to Wozniak’s son, Wozniak died of colon cancer in January after an eighteen-month battle with the disease.

Jordan became pals with Wozniak, a narcotics officer in Chicago who also worked at the United Center, after Wozniak accidentally smashed the back windshield of Jordan’s car while parking it. Wozniak fessed up and offered to pay for the damage. Jordan appreciated his honesty so much that he ended up hiring Wozniak for his personal security detail around the time his flirtation with baseball began. Wozniak stuck around afterwards, even going on Jordan family vacations. The two remained close once MJ retired (for real, that is), and Wozniak had a tattoo of the Jumpman logo on one arm and “23/Dog” on the other. Jordan paid Wozniak, who was no longer able to work for him, until Wozniak passed away.

John Michael Wozniak worked for Jordan for more than two decades until he could no longer work. MJ paid Wozniak until the day he died.

It’s fitting, therefore, that Wozniak’s moment in the documentary showed a side of Jordan hidden for most of it — the real Jordan, the one who can’t put his own spin on a memory.

Look, Jordan’s formal, present-day interviews are illuminating, but they’re very polished. He knows exactly what he wants to say in order to advance his own story about his past. He makes excuses for everything he did. He lists his enemies while pretending not to care about them. He’s as competitive about holding the narrative advantage as he was about winning games of basketball or rounds of golf.

In the depths of the United Center over two decades ago, however, we saw MJ’s goofy side as he and Wozniak teased each other. The interaction wasn’t *completely* natural, only because I’m not sure anything can be when there’s a film crew constantly present (despite what anyone on a reality show will tell you). Jordan played to the camera in ‘98 the way he plays to the camera now. He’s always been savvy, aware, calculated. But there was something real about the exchange that stood out from the rest of “The Last Dance”.

Wozniak showed that, on some level, Jordan was capable of genuine affection. We don’t see that very often. With the exception of his parents and Kobe Bryant, Jordan talks far more about people he hates than those he loves. But it seemed like he and the security guard had something special, and the backstory proved it.

You know what else Wozniak showed us? That Jordan did indeed have what he described in a 1990s interview as a “competition problem.” The scene was so funny — shocking, almost — because very few people have ever seen Jordan lose one-on-one, let alone to a small man who looked like he was a few inches of hair away from becoming Brian May. And there’s a moment, despite his laughter, where it’s obvious that Jordan is genuinely bothered by the loss.

You vs the guy she told you not to worry about pic.twitter.com/fYe35uF072

Jordan was wired differently. It’s one thing to hear him tell an interviewer as much — it’s another to actually witness it in defeat in such a candid setting. Wozniak was the first guy we’ve seen beat Jordan without eventually getting his comeuppance. Magic Johnson, Larry Bird, Isiah Thomas — Jordan lost to them all, at one point or another. But then he made sure he won. Even this documentary is his chance to have the last word.

Rather than revenge, what Wozniak got in return was affection.

It sounds silly to suggest that Jordan would want to get back at a security guard for beating him at a meaningless game. But, like, have you been watching this? We’re on the Michael Jordan Grudge Tour. Wozniak is so significant because he’s the only person to avoid MJ’s wrath. Perhaps the only person MJ liked. If only he were here to see his moment in the spotlight, and how rare the role he played in Jordan’s life turned out to be.

Don Lemon to Bob Costas: What Place Does Sports Have In A Nation Confronting...