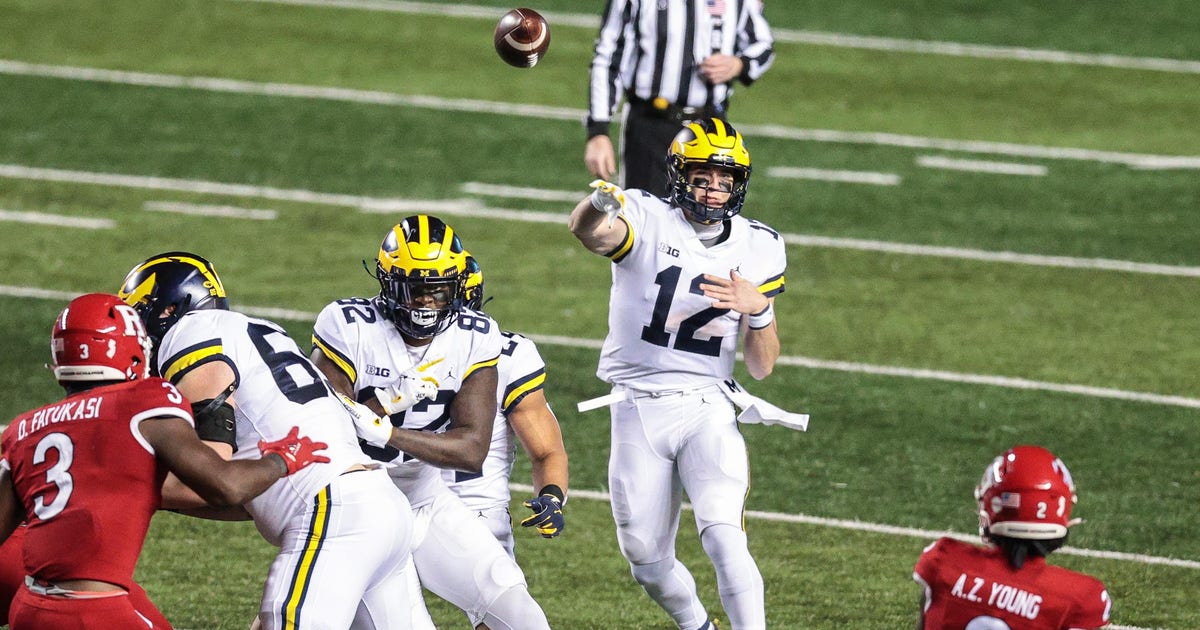 PISCATAWAY, N.J. (AP) — Hassan Haskins dove in from less than a yard out on fourth down in the third overtime and Michigan outlasted Rutgers 48-42 on Saturday night, avoiding its worst start in 53 years.

Sophomore Cade McNamara came off the bench and threw four touchdowns passes and ran for another as Michigan (2-3, 2-3 Big Ten) snapped a three-game losing streak and handed Rutgers (1-4, 1-4) its fourth straight loss.

Michigan missed the 2-point conversion after Haskins’ touchdown, but safety Daxton Hill intercepted Noah Vedral’s desperation heave into the end zone from the 24-yard line to end the game that lasted 4 1/2 hours.

Vedral threw an 11-yard, fourth-down touchdown pass to Aron Cruickshank and then carried two defenders into the end zone on the 2-point conversion run to tie the game at 35 and force the extra sessions.

Both teams missed field goals on the first possession of overtime. Vedral threw a 25-yard yard touchdown pass to tight end Jovani Haskins to put Rutgers ahead 42-35, but McNamara scored on a 2-yard run to tie the game.

McNamara replaced junior Joe Milton for the second straight week and finished 27 of 36 for 260 yards. The sophomore had TD passes of 46 and 9 yards to Cornelius Johnson, 8-yards to Nick Eubanks and a 6-yarder to Mike Sainristil.

Vedral was 29-of-43 passing for 378 with three touchdowns. Johnny Langan ran for two touchdowns and Val Ambrosio made two field goals, but missed a potential game-winning 45-yarder in the first OT.

Giles Jackson had 95-yard kickoff return for a touchdown to ignite a big second half that helped Michigan overcame an early 17-0 deficit.

Michigan: Jim Harbaugh has a new quarterback. While McNamara does not have the mobility of Milton, he has a great arm and makes smart decisions with the ball. The Wolverines can make it two in a row next week at home with a game against winless Penn State (0-5). No Nittany Lions squad has ever lost its first five.

Rutgers: The Scarlet Knights have been competitive under Greg Schiano and this was another one. They just have to find a way to get over the hump. This is the second straight week they blew a second-half lead.

Insect-Infused Skin Oils – Point68 is Made with a Combination of Plant Oils and...