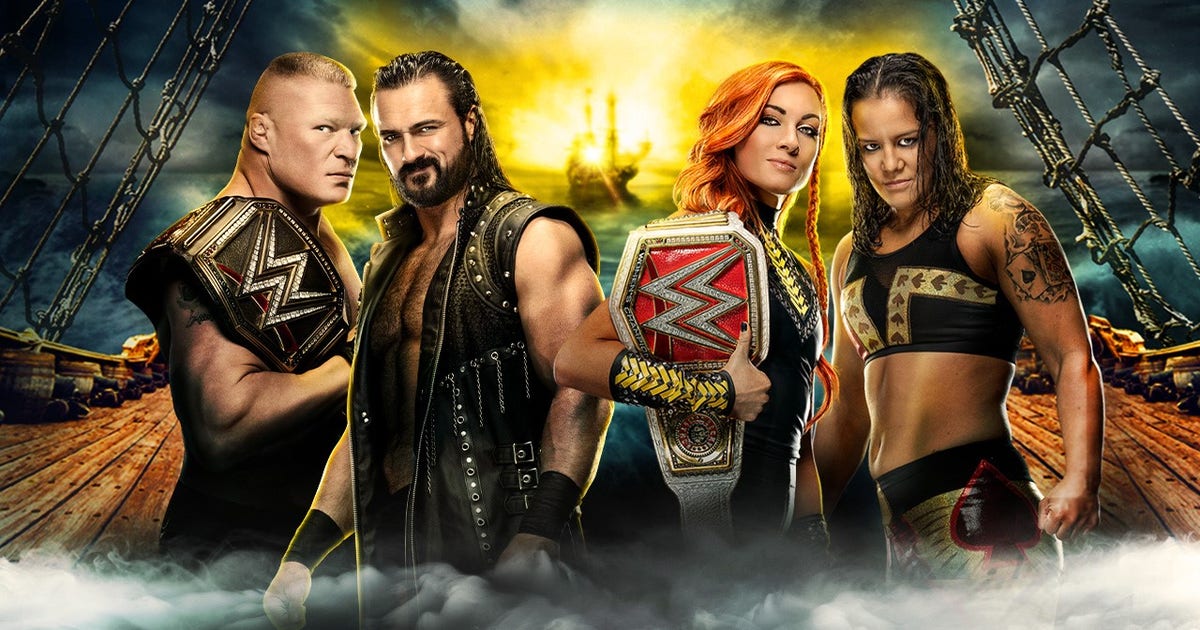 The Grandaddy of Them All. The Showcase of the Immortals. The Show of Shows. It’s WrestleMania — and this year, it’s too big for one night.

WrestleMania 36, available on FOX Sports pay-per-view, comes to you this weekend. Here’s everything you need to know about this epic extravaganza.

The 2020 edition of WrestleMania is a two-night event, on Saturday, April 4, and Sunday, April 5. The show starts at 7 p.m. ET on both nights.

Cool! How can I watch it?

You can order WrestleMania 36 on FOX pay-per-view here and stream it on all of your connected devices. WWE Network subscribers can also stream the show.

Is there a preshow?

Is there a preshow?! It’s WrestleMania! Of course there is — on both nights. Two matches (in addition to the 16 previously scheduled across both nights) have been added to the WrestleMania 36 Kickoff: Drew Gulak vs. Cesaro and Liv Morgan against Natalya.

Catch parts 1 and 2 of the WrestleMania Kickoff show on FS1 at 6 p.m. ET Saturday and Sunday, featuring some of your favorites from WWE Backstage.

It’s going to be amazing. The two-night spectacle will give us all a much needed helping of entertainment.

And according to Charlotte Flair, who recently joined Renee Young and Paige on WWE Backstage, WrestleMania 36 will give the Superstars an opportunity, as well:

Got it. And where is WrestleMania happening?

WrestleMania 36 was originally slated to go down in Tampa Bay, Florida, at Raymond James Stadium, home of the Tampa Bay Buccaneers. Since the outbreak of the COVID-19 coronavirus pandemic, the event has been moved to WWE’s Performance Center in Orlando. Usually, the “PC” is used as by Superstars to train, work on their skills, and return from injury, although WWE has put on shows from the Center in the past. Triple H called the PC a “saving grace” in a situation like this (via Sportskeeda):

“Yeah, I think we would have absolutely been in a different situation right now [without the Performance Center], as is everybody. But the Performance Center ended up being sort of worth its wait, so to speak, of the ability to… and it was sort of the intent from the beginning, to not only be able to train there, but create content there on a 24/7 basis. We have used the Performance Center in the past, used it last year … we did a Superbowl half-time show. We’ve done other shows, we’ve done NXT there. So, it’s been used for that purpose but in this situation, it really turned out to be the saving grace, so to speak of us being able to continue to entertain our fans.”

However, WWE has told reporters WrestleMania 36 will also emanate from a number of other undisclosed locations, each of which will be a closed set with only essential personnel on hand.

Will there be a crowd?

There will not be, in accordance with CDC guidelines and recommendations. Triple H spoke to our Martin Rogers about the responsibility to entertain fans even without the WWE Universe in attendance:

#WrestleMania won’t have a crowd, but this two-night extravaganza is absolutely for the fans.@TripleH spoke to @MrogersFOX about the added responsibility of serving the WWE Universe and all sports fans in these chaotic times: https://t.co/74QG96Dsrl

Drew McIntyre, who has a championship match at WrestleMania against Brock Lesnar, also spoke to Rogers about preparing for the biggest moment of his career without fans in attendance:

This year’s #WrestleMania will be an event unlike any other.@DMcIntyreWWE spoke to our @MrogersFOX about what it’s like to prepare for a WrestleMania with no crowd, and how he hopes his own story will continue to inspire fans worldwide: https://t.co/esiqvgCQtd

While Flair joined Nick Wright on The Herd to explain that no matter whether there’s 100,000 fans in the arena or zero, she’s thinking about everyone watching at home and proving that as performers, WWE Superstars can rise to any and every occasion:

“To me, whether the fans are there or not, I’m still thinking about the millions at home… I want to prove that you can be just as invested without the bonus of a live audience.” — @MsCharlotteWWE pic.twitter.com/c92qCo3mG1

Fair enough. So, what are the matches?

We’re glad you asked! Let’s run through the card, starting with the championship matches. (Note: At this point, there is no indication of which match will take place on which night.)

SmackDown Tag Team Championship Ladder Match: The Miz and John Morrison (c) vs. The Usos vs. The New Day

The legendary @JohnCena talks about the last month of @WWE TV. #SmackDown pic.twitter.com/rXo1UE0x8p

“My little brother-in-law took the first Styles Clash ever on the trampoline.”

‘The Phenomenal’ @AJStylesOrg shares the origins of his signature finisher. pic.twitter.com/UheeBls5rk

“The truth will be heard.”

Awesome! Is there anything else I need to know?

You’ll want to make sure to follow WWE on FOX on Twitter, Facebook, Instagram, and YouTube, where we’ll be bringing you even more WrestleMania 36 coverage, including instant reactions from some of your favorite stars of WWE Backstage and a few other surprises you’ll have to see for yourself!